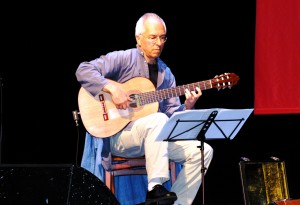 There was a time when the youthful John Williams was marketed as a bona fide guitar hero, a classy alternative to the myriads of guitarists that suddenly dominated the pop music marketplace after the British Invasion of the 1960s.  But in reality, the reputation of the Australian-born Williams—once the prize student of Segovia—was firmly in place years before the guitar became the instrument of the masses, and is arguably even stronger now that Williams himself has become an elder statesman of the instrument.  Ironically, despite Williams’ long and ongoing association with Columbia Masterworks (now Sony Classical), a live Williams appearance in America in recent years has been something of a rarity, Williams preferring to work in Europe (he makes London his home).

Thus this rare area recital appearance should be savored as an opportunity to experience the flawless technique that has become a Williams trademark: there are times that you could swear that two guitars are playing, yet there are none of the usual fret-changing buzz sounds so commonplace in guitar recitals.

Williams has made many transcriptions for guitar, but always with careful consideration as to whether or not a given piece will make a successful transposition to the instrument.  Among those to be performed will be Williams’ own transcriptions of works by Vivaldi, Scarlatti, Granados, Albéniz, and contemporary pieces by Mangoré, Sculthorpe and even Williams himself, along with film music that includes the theme that Williams played for the movie “The Deer Hunter,” Morricone’s theme from “Cinema Paradiso” and in a bizarre case of “John Williams plays the other John Williams,” the theme from “Schindler’s List.”  To celebrate St. Patrick’s Day a day late, Williams will finish with a finale of “Caralon’s Concerto” and traditional Irish tunes.  (Dennis Polkow)