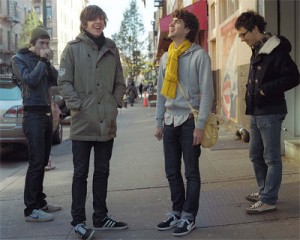 After carefully researching Facebook for twenty minutes (okay, mindlessly procrastinating for three hours), I can safely conclude that for a sizable amount of the 16-25-year-old demographic, “indie” music consists solely of three albums: “Transatlanticism,” “Give Up” and “Plans” (which, evidently “changed the lives” of two of my Facebook friends). So kudos to Ben Gibbard, who somehow managed to sell mid-tempo crooning to the masses, but now he’s got competition to fend off; post-Death Cab acts, led by Tokyo Police Club, have targeted Gibbard’s throne with thoughts of regicide, armed with an overtly nasally vocal style (“quick, the lead singer has a cold, let’s lay down some tracks!”). “Elephant Shell,” TPC’s debut LP and follow-up to the buzz-producing “A Lesson in Crime” EP, saw the Canadian quartet toning down the post-rock skittishness of the EP in favor a more restrained, focused affair. The twenty-eight-minute, eleven-track effort doesn’t feel all that breezy or frenzied, just kind of short, definitely a tad disappointing for a thoroughly decent band. If anything, the LP’s bouncy basslines, sporadic hooks, cutesy handclaps and vaguely emotional lyrics bought them into a few extra Facebook profiles and a spot in line to the emo-pop throne. (Andy Seifert)