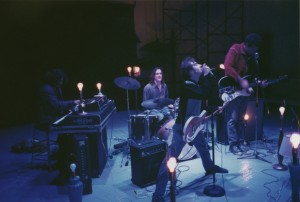 Red Red Meat’s third full-length, the landmark 1995 Sub Pop record “Bunny Gets Paid,” undergoes a reissue this month via the label, and the band’s celebrating the occasion with a handful of shows, including two at Empty Bottle this week. The band, of course, led by singer/guitarist Tim Rutili (who went on to front Califone), hasn’t been truly active in more than ten years, save for a few reunion shows over that time, including one at Hideout in 2008. “Bunny Gets Paid,” a classic mid-nineties indie-rock exercise in experimental, bluesy, folk exploration, still remains one of the more underrated records of that decade—its re-release, stacked with extra bonus tracks of alternate versions, demos and non-album tracks, is well deserved, to say the least.

There are records that stick with you forever, mostly because you’re introduced to them at a very formative stage in your life, or while you’re suffering through a traumatic experience. I was waist-deep in high school when I got my hands on this album, and let me tell you, going back to it for the first time in quite a while, it’s amazing how every note, every little piece of sonic information, can remain embedded in your bones for so long. It’s like it grows along with you. I can get a picture of myself, 15, maybe 16, blasting “Gauze” at top volume in my bedroom in the middle of some melodramatic teenage meltdown. I know it helped. I want to do it now, again. Jesus, “There’s Always Tomorrow” put me to bed some nights. Yeah, I remember “Bunny Gets Paid,” and it remembers me pretty good too.

“It was interesting, I was surprised at how I still enjoyed the music,” Rutili says of going back to the record. He’s since relocated to Los Angeles, but he’s back in Chicago to prep for the shows and get some recording done with Califone. “I thought a lot of it was going to be embarrassing, in a teenage poetry kind of way, but I think we were all pretty happy with the way it sounded. The sound is really interesting—it was all tape, this was before anything we did touched a computer. And it actually does sound better. Analog is better.”

Turns out, “Bunny Gets Paid” was a stepping stone for the band. “Back then, I think on that ‘Bunny’ record, it was the first time that I broke away from…or I think it was where me as a songwriter and all of my bandmates, we all became ourselves. That might be, for all of us, the first original music that we did that was just our own. We took things we loved and mixed them together just right so it was ours.”

The impact the record played in Rutili’s life as a songwriter, in his personal progression, is still unclear to him. “It’s really hard to say,” he says. “I think it’s a good record, and I’m really happy it’s coming out. Of course, I’m making a new record, and I think it’s the best thing I’ve ever done… Right now we have, with me and the people I play with, this body of work we’ve been doing together that goes back almost twenty years. It’s a strange place to be, but it feels really healthy to feel like, I’m more creative now than I ever have been. So I don’t look back dismissively, I look back at it as a piece of the puzzle, something that helped get us to here.”

There’s always been speculation that Red Red Meat never officially broke up, just that the members—which include Brian Deck, Ben Massarella and Tim Hurley as well—kind of drifted to their own separate projects. Rutili nips that with a laugh. “Well, we stopped playing together. Stopped touring, stopped making records. Sounds like a breakup to me. It’s like, ‘We don’t fuck anymore, but we still call each other on the phone…'”

One would imagine an initial awkwardness sitting in a room with these musicians for the first time in years. “Well, we’re all kind of better musicians now, and there’s really a lack of alcohol involved in the process,” Rutili says. “It was pretty weird at first, but it ended up, after the first day was weird, after that everything felt pretty good.”

So how about another record, a new Red Red Meat collection? “We always talk about making another record,” Rutili says. “If the situation was right, I would love to work with those guys.”