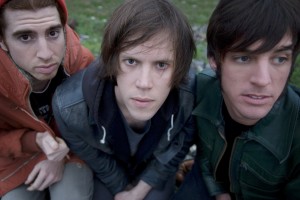 Let’s talk about drummers, because many are wholly underrated and oft overlooked, all tucked away behind the frontman, behind one-to-seven guitar players (depending on the band), behind the optional piano player, even behind the damn bass player. The lead singer woos the crowd and the guitarist blows away the technical aficionados, sharing in the glory, while the drummer fundamentally lays down the foundation of a rock ‘n’ roll song. Without some shaggy dude back there pounding out his frustration, a guitar and a bass can sound horrifically flat. And don’t even get me started on drum machines. How dare they take jobs from hardworking drummers in this economy?

Thankfully, power trios flip the hierarchies—the drumming is tantamount to everything else, and anyone can notice it. Just look at “Mission Control,” the last record from Athens garage-rock trio The Whigs—space exists (no pun intended), and with the amps already turned past ten, drummer Julian Dorio has to climb up the mix and blast our faces with heart-pounding bass drum and old-school hi-hat. It’s been done before, this straight-up, loud-ass drumming tactic, but, man, it feels really good this time around.

“A lot of drummers I grew up listening to had drummers like that, and a lot of those groups—Zeppelin, The Who—have a frontman who’s not playing an instrument, so essentially it’s a musical three-piece,” Dorio says. “There’s a lot of space for the drums. We sort of like the dynamic of a band that has a lot of responsibility on the bassline; it’s rare that our bassline can just sit in the back and be an afterthought.”

A lot of band leaders say they want their albums to sound like their live show, but Dorio sounds like he genuinely means it. He slightly bemoans that the band’s debut, “Give ‘Em All a Big Fat Lip,” didn’t emulate the band’s live persona. But he insists “Mission Control” does, an album full of blaring, overdriven distortion, ever-moving basslines, early-nineties alt-rock melodies and Dorio’s galloping, omnipresent (does he have four arms?) rhythmic chops. The band recorded “Mission Control” at Sunset Sound in L.A., but Dorio says the band was cognizant of any glossy, big-budget studio temptations.

“It did occur to us that we didn’t want to take that opportunity to go to L.A. and do what we sometimes see a lot of bands do when they get a big budget: they put on string quartets and get carried and all that,” Dorio says. “For us, we hadn’t made that record yet, where we almost treated it like a live show. In order for us to make the record we’re writing right now and for anything in the future, we wanted to have that as a foundation. So it is more straight-up, and I think it’s a good launching pad for more albums to grow from there.”

As for that new record, Dorio says early demos show a band with a little more melody, a little less garage-band overdrive, but that The Whigs have no intentions of honing in on supposed sonic perfection. The Whigs are content to let songs breathe, to let the little unintended tidbits freely exist within the song.

“It’s that human quality that I find attractive. I appreciate a flawed album more than a perfectly executed album that has no flaws whatsoever,” Dorio says, before half-joking: “But I guess we’re not capable of doing that.”