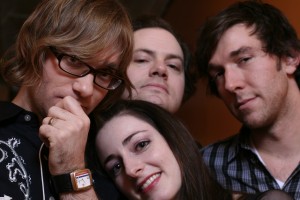 When The Saturday Nights broke up last summer, guitarist/vocalist Paul Foreman and drummer Joe Daly were forced to enlist some new help. Long time friend Nick Rocchio was added as an additional guitarist and vocalist and a Craigslist ad brought Blair Douglass to the group to round out the rhythm section on bass. “Blair played one track with us and we were like ‘If you want the gig you’ve got it’ because when a really cute girl walks in wielding a Fender P-bass, it’s kind of hard to say no,” says Rocchio. Soft Speaker was born.

Currently the band’s only release is a two-song digital single. But Soft Speaker is just days away from releasing its first proper release, an EP entitled “Conditions,” which the band is pressing in vinyl and CD format, both independently.

In a short time, the band has developed a sound that has the potential to be noticed. The songs are simple, clean and catchy.

Foreman and Rocchio shared the bulk of the songwriting responsibilities on “Conditions,” which was recorded and engineered by Daly in the band’s rehearsal space. “I maybe have a little more of a contemporary feel to my songs and Paul’s are nice, fuzzy rock ‘n’ roll. He’s capable of writing a nice sweet tune too,” says Rocchio.

Many of Rocchio’s lyrics are inspired by the fact that he has been unemployed for the last year. “That makes for great song writing, being down in the dumps and broke. So, I guess that’s where I’ve gotten my inspiration, having the time to write and having to the time to sit there and think about how I feel like I’m slipping into despondency in my little apartment.” While the songs that he contributes often have a light and airy feel to them, many of the lyrics, when sought out, are much darker than the sound would initially imply.

One song that will appear on the CD and digital versions of  “Conditions” is a remix of “The Great Brick Mosque & I,” a song that was written by Foreman and originally appeared on the band’s digital single. d_rradio (pronounced “D.R. Radio”), an outfit based in the United Kingdom, remixed the track and the band couldn’t be happier with the product. “It’s totally different, which is really cool,” says Rocchio. “It’s very ambient. There’s some heavy percussion in the background and ambient piano over it with Paul’s vocals mixed into it.” (Todd Miller)