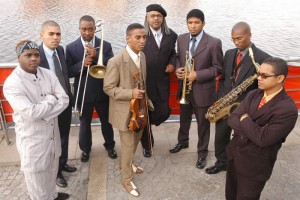 Bandleader and percussionist Juan de Marcos has a long history as part of the Cuban music scene—he was one of the key musicians during the recording of the highly successful “Buena Vista Social Club,” a project put together by American guitarist Ry Cooder after a planned Havana session with several Malian musicians didn’t pan out. The success of that first disc prompted a film and also a one-night-only sold-out gig at New York City’s Carnegie Hall, which was recently released on CD. “It’s a nice album,” he says. “In fact, I like it much more than the original recording because it brings the special energy of that moment.” For the current tour (the first he’s done of the US since 2003), de Marcos has put together a team of musicians from various generations and styles, which makes it possible to give audiences more than a glimpse of what the music of his island is all about. “I don’t play, for example plain timba, because that doesn’t give you the right idea of a Cuban band,” he says. “You have to play contemporary, you have to play traditional and other different styles to show their musicianship, because they are all excellent sounds. Showing that musicianship and bringing energy happiness to all the people—that is what the people need at this moment.” (Ernest Barteldes)