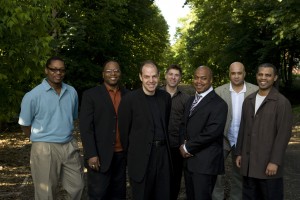 This year, the legendary New York-based independent jazz label celebrates its seventieth anniversary. Founded by Alfred Lion and Max Margulis in 1939, Blue Note (no relation to the jazz-club franchise of the same name) became seminal for musicians like Thelonious Monk, John Coltrane and Herbie Hancock, who all cut albums for the label during their fruitful careers. To celebrate this landmark, a super-group formed by Nicholas Payton (trumpet), Steve Wilson (alto sax), Ravi Coltrane (tenor sax), Peter Bernstein (piano), Bill Charlap (piano), Peter Washington (bass) and Lewis Nash (drums) revisits some of those historical compositions on “Blue Note 7.” The selection kicks off with the title track originally composed by Cedar Walton. The tune, which appears here in a modern arrangement, is a great opportunity for the musicians to showcase their individual talents—Charlap does a beautiful solo around the five-minute mark, and his carefully placed riffs are the tune’s heart and soul. Another highlight is “Criss Cross,” a Monk composition from the 1962 album of the same name. “Criss Cross” is a highly complex bebop piece, but in this group’s hands it sounds as if played with great ease—Washington’s bass solo is the tune’s centerpiece, but listen to the way the horns interact with Nash. It shows clearly that this septet had great chemistry during the recording sessions. Also notable is Joe Henderson’s “Inner Urge,” an up-tempo tune that gives the musicians plenty of breathing space, and a lot of improvisation ensues. This is the kind of disc that will probably make fans curious to hear the original recordings—probably sparking a rediscovery of those immortal jazz cats. And hearing it live, things just get a little sweeter. (Ernest Barteldes)