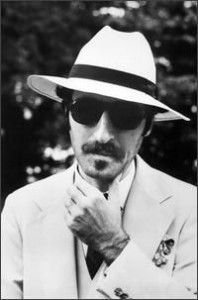 Since he first burst onto the music scene in the 1970s with his panama hat, dark glasses and 1920s suit, this singer-guitarist has been an enigma that even his friends have been unable to crack. For many years, he was thought to be a guise for either comedian Andy Kaufman or Frank Zappa, but that proved to be untrue after both those artists passed on and Redbone continued to perform. In the 1980s, he began recording jingles for TV and radio (one of the most memorable being “This Bud’s for You,” an up-tempo ragtime tune he did in 1984), and for a brief period he sang about beer and laundry detergent—something that helped bring him back to the public eye after a period of hiatus in recording. More recently, Redbone participated in the soundtrack of the Will Ferrell vehicle “Elf,” singing a duet with Zooey Deschanel on the Christmas classic “Baby It’s Cold Outside.” Regarded by Bonnie Raitt as one of the best singer-guitarists in the business, tirelessly traveling around the country by car—after having survived a plane crash in 1979, he reportedly refuses to set foot on a plane. (Ernest Barteldes)