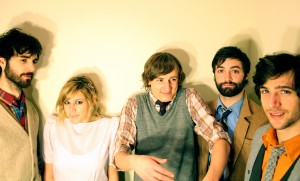 “We really try to be inspirational. We really want people, after they listen to [our songs], to feel really accomplished or like when, after you’ve done a ton of work in a day, and you feel like you’ve gotten a lot done, and you were actually worth something for that day,” says Thomas Fricilone, vocalist/guitarist and founding member of Raise High the Roof Beam. The band tries to evoke this feeling through a combination of lyrics that are inspired by various philosophy texts that Fricilone enjoys, such as Dostoyevsky’s “Notes From the Underground,” plus melodic instrumentation with “big harmonies,” adds Josh Lambert, the group’s bassist.

Many parts in the band’s songs are sung by all of the members, giving it a “very anthemic” sound, according to Fricilone. They also employ ukulele, mandolin, bongos, banjo and various percussive instruments in addition to guitars, keys and drums, all to add to the layers of sound.

Raise High the Roof Beam’s recent EP, “The Buildup,” was recorded last summer with a slightly different lineup, in a practice space in a warehouse that had a hole in the ceiling that allowed buckets full of water to come into the space and mold to thrive. “Unfortunately, we kind of got sick from the mold that was, like, growing on the ceiling,” says Fricilone. “Every day we got there, it just smelled worse.”

Despite the toxins, the band came out of those sessions with an EP that, especially for a young band, has promise, with hints of sounds that are similar to those of Sufjan Stevens at some times and Vampire Weekend at others.

Not content to rest on what they had accomplished, Raise High the Roof Beam is already at work on a follow-up full-length record. The band has moved out of the moldy room and into the attic area of a house that Fricilone’s father owns. Here, the band is free to practice and record all of the time in no danger of health-related issues.

Scott Westrick, the band’s drummer, is also a current sound-engineering student at Columbia College. Westrick engineers the band’s recordings, saving money and also allowing the band to take its time with the recording process. With this freedom, they are able to try things that they may or may not end up using. “It takes a lot longer because we’re all very nitpicky about everything and we all definitely want to make it the best we can,” Fricilone says. “But at the same time, it’s a good thing because we’re always happy with what we’ve done.” (Todd Miller)