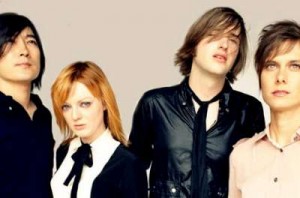 Hey, where the hell have The Von Bondies been all this time? Seems like ages ago (okay, 2004) when these scrappy Detroit garage rockers had a decent mainstream hit in “C’mon, C’mon” and looked prime to wrestle The Strokes off the top of the podium of trendy alt-rockers who wear leather jackets. But since then, things have been unpromisingly quiet for the Bondies, the only news stemming from lead singer Jason Stollsteimer’s crazy feud with former good friend Jack White, who beat the crap out of him outside a Detroit night club in 2003. But finally Stollsteimer and the gang have a new record, “Love, Hate, and Then There’s You,” and it’s not bad, an album with big punk-pop choruses, Stollsteimer’s typical snarky delivery and a lot of bouncy breakdowns and group sing-alongs. It’s nice to see that after the band’s five-year nap, the Bondies awaken peppier and crisper than before, and with a much better career outlook than The Strokes. (Andy Seifert)