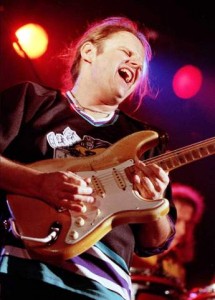 A veteran of the music scene who had his beginnings in the same Jersey Shore environment that spawned Bruce Springsteen, Walter Trout—like many other American blues guitarists—has found a much larger following abroad than in his own homeland. But he is not complaining—the man sells out large venues in Amsterdam and London on a regular basis, and he was voted number six in a 1993 top-twenty blues-guitarist poll conducted by the BBC. Trout has a fiery guitar style that reminds us of the late Stevie Ray Vaughan, but at times he slows down, putting in clever, measured guitar licks with more of an English-blues vibe reminiscent of Jeff Beck and Eric Clapton (something he might have picked up during his time with the Bluesbreakers). But he is no imitator—he has a voice of his own, which is evidenced by the original material he has put out in the last two decades—an anniversary that is being celebrated during the present tour, which promotes his latest independently released disc, “The Outsider.” (Ernest Barteldes)