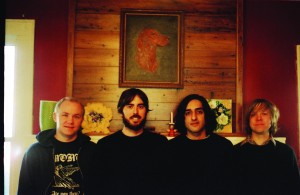 Driving eighteen hours and 1,200 miles from Chicago to Austin, Texas for the annual mayhem that’s the South by Southwest music festival seemed like an insane idea. Since I’d procrastinated on purchasing a plane ticket a few weeks ago, the price had reached an implausible amount. I’d never been to the fest and wasn’t going to let money hinder me from experiencing one of the greatest musical weekends of my life. With our iPods fully loaded, I, my boyfriend and our French-Canadian friend depart Chicago in the middle of the night and head southwest. During the expedition, we escape a speeding ticket, experience the surprising beauty of Arkansas, drive through the R.E.M.-inspiring city of Texarkana and eat dreadful fast food at Bush’s Chicken. At 3pm, we arrive in warm and verdant Austin. Spring has definitely sprung in The Lone Star State. I can’t stop thinking about the scene in “Pee Wee’s Big Adventure” when Pee Wee incites the Texans to sing “Deep in the Heart of Texas.”

Upon taking a bus downtown to the center of the beast, we aimlessly stumble into a music venue called Mohawk. The multi-tiered outdoor venue evokes summertime as hipsters aplenty lazily imbibe one-dollar PBRs on the patio. While I listen to Delta Spirit play, I realize The Hold Steady simultaneously performs next door. As we leave Mohawk and walk down the street, “Killing Moon” blasts in the distance. Could it be? Yes, it’s Echo and the Bunnymen live! These moments epitomize the spirit of the festival-being a part of something so surreal and amazing in such a short period of time.

The next day we check out Explosions in the Sky’s (pictured) set in a massive park. Sitting amongst thousands of people feels anti-SXSW since the fest is about discovering bands in small clubs, not in Lolla-caliber spaces. We attempt to check out Austin native Voxtrot, but the badge-only policy prohibits us from entry. When all else fails, we succumb to 1990s one-hit-wonder Marcy’s Playground. While waiting for them to appear in a random courtyard, we head next door to a faux Irish bar where a U2 cover band named Mysterious Ways is midway through its set. I never imagined that my festival experience would entail hearing a mediocre cover of “Sunday Bloody Sunday” followed by Marcy’s annoying yet catchy “Sex and Candy.”

Twelve hours later, we once again traverse the lonely stretches of highways back to Chicago. It takes us over four hours to get out of Texas because of bumper to bumper traffic. We safely arrive in bleak Chicago the next morning. As I try to drift off to sleep, I wonder if this trip really happened or if I dreamt it. Did we really drive all that way just to see a U2 cover band? Sure, we might’ve missed premier acts like Kanye and Metallica, but the sensory overload of SXSW will live in infamy-along with the aftermath of Bush’s Chicken. (Garin Pirnia)