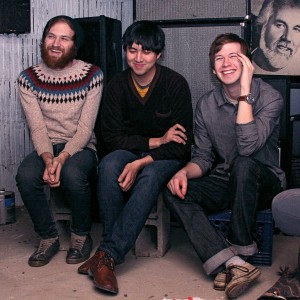 Netherfriends is made up of Shawn Rosenblatt, a senior at Columbia College, Justin Fernando, previously of the Arkansas-based Tel Aviv and Loyola student Paul Newmann. When Newmann joined with Rosenblatt, he had just moved to Chicago to attend school, and hadn’t brought a drum set with him. “[Newmann] told me that he would play a ladder with a toothbrush if he had to,” says Rosenblatt. “So, we started playing with him playing pots and pans and kitchen utensils.” Eventually, they found him a drum set and added Fernando. “Justin plays so many instruments, it’s really great to play live with him playing bass and keyboard at the same time. He is an unbelievable musician. He plays his bass with his left hand and his keyboard with his right.”

When listening to Netherfriends’ songs, you may hear samples that were recorded anywhere from any random street in Chicago to Rosenblatt’s bedroom. “I love field recordings and manipulating them to the key of the songs,” says Rosenblatt. “I think that adds so many layers to the songs.”

Those layers play a key role in defining Netherfriends’ sound, but even more essential to the band is its vocal melodies. “I feel like the melody is the most important thing to a pop song,” says Rosenblatt. The melodies here are catchy and constant.

One of the band’s main influences is Animal Collective, which is somewhat immediately clear in its songs. “It’s hard when you like a band so much and you listen to them so much to not sound like them,” Rosenblatt says of the comparison that is often made, “but at the same time, I don’t want to be known as the Animal Collective band.”

As well as having released a seven-inch on the California-based label Black & Greene Records, Netherfriends has also released a cassette tape, “Home Is Where My House Is,” on Omaha-based label I’m Drinkin This. When the label first approached the band, Rosenblatt thought that it was some kind of scam—a label that wants to put out a tape? “I was very skeptical of it,” says Rosenblatt. But the project has been a success. “When we go on tour, we sell out of them pretty quickly. People go crazy for them. A lot of people say, ‘Oh, I’ll have to get a tape player now.'”

The band is currently working on an EP to be released in June. As well as in other formats, it will also be released on cassette tape. Rosenblatt acknowledges that CDs are on the way out and that vinyl is very much in, but he sees tapes in consumers’ futures again. “Hopefully, tapes will be the next step.” (Todd Miller)