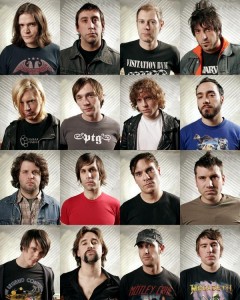 I don’t usually ascribe to the notion that a band can be “over-the-top” (case in point: I consider E.L.O. to be one of the top ten acts of the 1970s), and Boston’s arena-rock collective Bang Camaro is no exception: this band isn’t over-the-top enough. Seeking to answer the question, “wouldn’t Ratt be awesome if they had like ten extra lead singers?” Bang Camaro regurgitates hair metal as generically as possible—cock-rock riffs that go nowhere, excessively predictable shredding and eight-to-fifteen singers that eliminate the genre’s most appealing trait—the cocky, repulsive and spandex-laden lead singer who spits at the audience and thinks his chest hair gets him chicks. Even lyrics—which are a slam-dunk to write for metal—are bewilderingly lame. Many are just repetitions of the title. The lyrics to “Nightlife Commando” are “Nightlife Commando! Just a nightlife commando!” sung over and over again. After watching the band’s morning Lollapalooza set, it was sadly apparent: Bang Camaro is pretty boring, which is something you should never say about a sixteen-piece hair-metal act. (Andy Seifert)