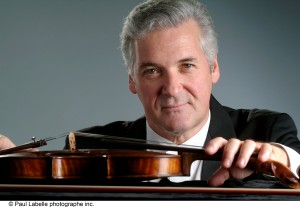 Although widely considered the greatest musical genius who ever lived, Johann Sebastian Bach never wrote for the modern symphony orchestra nor the piano, because neither existed back when he was composing.  But this doesn’t stop pianists and modern orchestras from performing his music, although in the case of the Chicago Symphony Orchestra, Bach was principally heard in overblown Romantic orchestral transcriptions for the early decades of its existence.  I can still remember CSO conductors routinely performing Bach harpsichord concertos as if they were piano concertos, complete with a pianist.  James Levine was a pioneer here in the early 1970s, presenting all six of the Bach “Brandenburg” Concertos at Ravinia with a small chamber orchestra as Bach scored them, with himself playing the harpsichord.  Sir Georg Solti was a Bach lover and recorded the “St. Matthew Passion” and the “b minor Mass” and even a set of “Brandenburg” Concertos that were never finished nor released, which the orchestra used to fondly refer to as the “Abandonburg” Concertos.  A number of early music specialists have been brought in to conduct Bach and other early music composers with varying success, but it was always a struggle to get the strings to eliminate the wide vibrato that is a performing staple for so much of the nineteenth-century music that is the orchestra’s central repertoire and which end up slowing down the brisk tempos needed for effective  performances of eighteenth-century music.  One solution is to hire conductors who will gladly perform Bach with a small chamber orchestra and harpsichord, but without alternating the orchestra’s playing style and while still keeping the tempos slow.

Such is the approach of violinist and conductor Pinchas Zukerman, who is celebrating his sixtieth birthday and this week and will serve as both soloist and conductor for two separate programs of Bach, dubbed Bach to Bach 1 & 2.  It’s hard to imagine who would want to hear Bach done with Zukerman’s stodgy approach, nor have to endure the intonation problems that have plagued his own playing for years now, but to each his own.  At least you’ll have a chance to hear several CSO members function as soloists.  Bach to Bach 1 (Thursday, Friday afternoon and Saturday) will include the First Orchestral Suite No. 1 with CSO flutist Jennifer Gunn, the Concerto for Oboe and Violin with CSO concertmaster Robert Chen and CSO oboist Eugene Izotov, the First Violin Concerto with Zukerman and the “Brandenburg” Concerto No. 2 with CSO trumpeter Christopher Martin.  Bach to Bach 2 (Friday night, Sunday afternoon and Tuesday) will include the Orchestral Suite No. 3 the Concerto for Flute, Violin and Harpsichord with flutist Mathieu Dufour, violinist Robert Chen and harpsichordist Stephen Alltop, the Second Violin Concerto with Zukerman and the Double Violin Concerto with Zukerman and Chen.  The only way to hear both programs in the same day (separate admission, though) would be to come for the Friday afternoon and evening concerts.  (Dennis Polkow)