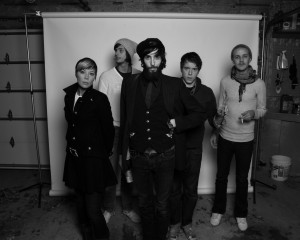 Late one night the members of Kindle, through a friend, gained access to a courthouse in Indiana, the same one that held John Dillinger and the one from which he later famously escaped. “We were looking for somewhere that has strong acoustics and an intimate setting,” says singer and guitarist, Joshua Wright. So the band went in and used the interior of the building for its acoustics. While there, they recorded harp and vocal tracks with the natural reverb that was created in the empty space.

By definition, “kindle” is a verb, to arouse or inspire. As a band name, the word signifies a fresh start, the members taking influence and experience from past projects and channeling their energy into something new. “[The name] represents us, as a culmination of all the styles and backgrounds we hail from as individuals,” says David Lubarski, a member of Kindle who splits his time between roles as one of the group’s two drummers and its bassist. “We wanted to start something new.”

While at times there are two drummers-and other elements such as harps and various other instruments incorporated into the band’s songs-possibly the most noticeable element is that of Wright’s voice. It’s nice and raspy and full, giving the songs a definite edge. The band classifies their sound in the beginning as something of a folk-blues-rock-soul combination, “but now it’s just rock and roll and soul,” says Lubarski. The soul definitely comes through Wright’s voice.

Wright acknowledges that many of the songs are constructed as stories. “I like to write like that because it’s outside of myself and it allows me to be a little more expressive, but most of the time, it’s pretty reflective of ourselves. That’s where the folk roots have still stuck.”

Two drummers on stage may be something interesting to look at, but the band is careful not to overuse the technique. “We look at the song as a whole and see what fits and what doesn’t fit with the two drum sets. If we feel like it needs to be a little bit louder or more rhythmic, we’ll use them. There have been some songs where we actually wrote with two drums, but I ended up switching to bass because we kind of seemed repetitive of each other,” says Lubarski.

Kindle is currently at work on its first full-length album, which will be entitled, “We Grow True,” while the band’s self-titled debut EP is currently available. (Todd Miller)