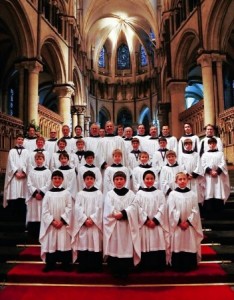 The Canterbury Cathedral Choir is one of the oldest and longest-established choral traditions in the world, going back to the church’s founding by St. Augustine in 597 A.D. when monks sang the Masses and services there.  The murder of Archbishop St. Thomas Becket while he was saying Mass at the Cathedral altar in 1170 by knights of King Henry II turned the site into one of Europe’s leading pilgrimage sites during the late Middle Ages and Chaucer was inspired to write his iconic “The Canterbury Tales” after a visit to the site.  The Cathedral’s first boys’ choir was formed in the thirteenth century and a separate choir school opened in the sixteenth century.  The responsibility of the Choir today is much what it has been for centuries: to provide the highest-quality music for worship at the Cathedral, six days a week.  Today this is done under music director David Flood, who auditions and trains members, prepares the choir’s repertoire and oversees its musical standards and the musical education of its members.  The choir itself consists of twelve lay “clerks,” men who are professional singers but also work locally, and thirty choristers, boys of age 8-13 who attend St. Edmund’s School in Canterbury and live in the Choir House within the precincts of the Cathedral.  This rare visit to the United States—the choir’s first in a decade—coincides with the 500th anniversary of the Coronation of King Henry VIII on April 21, 1509, during whose reign the Canterbury Choir School was established, and is being undertaken in part to raise funds to help ensure the survival of its longstanding choral tradition by continuing to provide endowments for choristers and refurbishing the Cathedral’s organ.  The tour repertoire is taken from the Cathedral Choir’s own worship services and includes music by William Byrd, Thomas Tallis and Benjamin Britten.  If you have never had the experience of hearing this group live, you are in for quite a shock and a treat: there is something to be said for the consistency and quality of the unbroken tradition of the same group of top-notch singers singing together, day after day, year after year, century after century.  (Dennis Polkow)