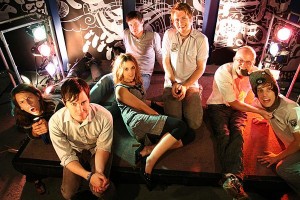 St. Louis really hasn’t produced much as far as underground music goes (Uncle Tupelo is about it), but out of the Missouri wastelands comes Gentlemen Auction House, a band with immediate potential to crack the ranks of indie elite by riding Arcade Fire’s coattails alone. A seven-piece indie-pop collective, GAH (already the best acronym in music) frequently features the kind of gaudy, orchestral arrangements that made Arcade Fire a surefire hit, but never flirts with self-righteousness, instead choosing quirkiness, immaturity and gimmicks (two drummers!). Sometimes this works—“Call it Casual” and “The Book of Matches” are jolly pop romps, guaranteed to “bring the house down,” if you will—and sometimes the effects are pretty damn awful, mostly when the band decides to try to be some kind of reggae/jazz/Michael Jackson hybrid thing. Still a relatively young act, GAH has plenty of time to iron out the wrinkles, blow up the third of its catalogue that sucks and become an indie “it” band based on the initials alone. (Andy Seifert)