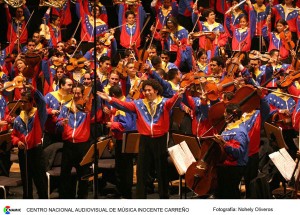 It isn’t often—as in like, never—that Chicago audiences get excited over the appearance of a visiting youth orchestra.  After all, youth orchestras are more about getting much-needed experience for players on their way up than entertaining audiences and, besides, we have plenty of great youth orchestras right here in town, including the Chicago Symphony Orchestra’s own training orchestra, the Civic Orchestra of Chicago.  So why all of the fuss about the Simón Bolívar Youth Orchestra of Venezuela making its first-ever Chicago appearance?  Because its 28-year old music director Gustavo Dudamel has made such a sensation conducting adult professional orchestras, including the CSO, and because Dudamel came through the ranks of that orchestra, having performed in its violin section before becoming music director.  Dudamel, like many of the SBYOV’s members, came from the impoverished streets of Venezuela and what is clearly extraordinary-although-still-developing talent might never have emerged at all had the SBYOV not been available to Dudamel and countless other young Venezuelan musicians who are beneficiaries of a radical system of neo-Marxism that extends even over into music.  Whatever else in going on in Venezuela politically—and it’s worth noting that controversial leader Hugo Chávez is still president there—its unique brand of “Democratic Socialism” extends over to “El Sistema,” a social action program that provides free musical instruction for more than a quarter of a million young people annually, of which the SBYOV is its crown jewel and international showcase.  The technical proficiency of the group is extraordinary, to be sure, kind of like watching Soviet gymnasts at the height of socialized sports at the height of the Cold War, or the precision that we saw in the opening and closing ceremonies at last year’s Olympic Games in Beijing; a mechanized, no-frills methodology that emphasizes a collective, play-by-the-rules approach over individual expression.  Friday’s concert by the group—which will include Ravel’s Suite No. 2 from “Daphnis and Chloe,” Castellanos’ “Santa Cruz de Pacairigua” (performed by Dudamel when he made his CSO debut here two years ago) and the Tchaikovsky Fourth Symphony—is sold-out at press time (although check for availability of turn-backs, given Passover and Good Friday) but Dudamel has opened up a rehearsal and workshop to the public and, although these are free, tickets are required and music students ages 10 and up will receive top ticketing priority.  There are also numerous seminars and performances across town for students across the SBYO’s three-day residency, which also inaugurates the CSO’s first-ever six-week Festival of Youth in Music, an initiative of its newly formed Institute for Learning, Access and Training.  (Dennis Polkow)