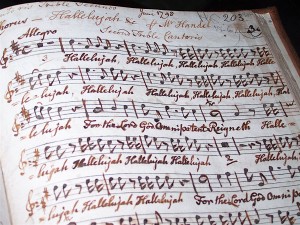 When Handel began work on a new oratorio set to scripture texts arranged by librettist Charles Jennens in late August of 1741, his imagination took such fire that he completed the entire work within the space of three weeks, including parts and orchestration.  The work, “Messiah,” was originally composed as the grand finale to a season of oratorio concerts that Handel would give in Dublin and which premiered there during Holy Week, 1742, although the composer would be rearranging the work for various sets of performers and circumstances virtually the rest of his life. To commemorate the 250th anniversary of Handel’s death on April 14, 1759, Baroque Band will recreate those first Dublin performances of “Messiah,” a version particularly recession-friendly as its initial orchestration made use primarily of a small string section and a small chorus.  We tend to think of Handel’s “Messiah” as a Christmas piece, but in actual fact, only a small portion of the first section of the piece deals with the Nativity and the majority of it deals with the redemptive power of suffering and the Last Judgment and was originally intended as an Easter piece.  Area early music lovers may recall that it was an annual performance of Handel’s “Messiah” that helped establish the reputation of the City Musick, Chicago’s first period-instrument orchestra led by late cellist Elaine Scott Banks, and those memorable performances became some of the most anticipated of the year.  Baroque Band, a new area period instrument orchestra which has some of the same players and is led by British violinist Garry Clarke but which has thus far has concentrated on smaller, eighteenth-century instrumental pieces, appears to be making a significant statement about its self-confidence and future by programming such a familiar and beloved work and relating it to the worldwide Handel anniversary.  Baroque Band will make use of twelve instrumentalists and sixteen choristers, virtually identical to the size of the performance forces that were employed by Handel for those earliest Dublin “Messiah” performances, although rarely heard that way in an age where the piece is more often than not performed in a bombastic and grandiose “Do-It-Yourself” manner of a cast of thousands.  Stripping away those excesses and recovering the timbres, textures, and forces that its composer originally intended allows for a transparent “Messiah” where every phrase of Handel’s glorious music can be heard on its own terms and where a sense of its original context, clarity and message can be restored.  (Dennis Polkow)