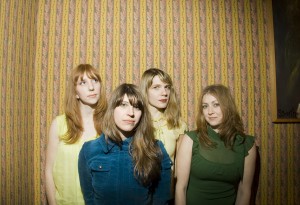 Last month local four-piece Coupleskate traveled to Austin for South by Southwest and played a bill that also included Peter, Bjorn and John… and one Kanye West. In fact, while at the venue, the women in the band were unwittingly leaning against Kanye’s gear and talking, when they were asked to move by one of the hip-hop star’s crew. Because nobody touches Kanye’s gear. Nobody.

“We were good sports about it,” laughs guitarist and vocalist Andrea Bauer.

Coupleskate has gone through a few variations over the years, producing the 2006 EP “Trophy” and this year’s full-length “Don’t Scare the Horses.” The current lineup—Bauer, guitarist Laura Watral, bassist Lauren Viera and drummer Martha Williams—has produced a vivid, convincing record with “Horses,” a deviation from the band’s previous fuzzy grit found on the EP and a venture into more intricate structures and patterns. Though slightly darker, Coupleskate maintains a raw energy that delivers on each reverbed turn, and with the help of surprisingly lush string arrangements—and the girls’ indie-rocker vocal prowess—show remarkable grace under subtle, but for sure present, fire. To maintain a balance between forgettable Lilith Fair, er, fare, and too-cool-for-school Vivian Girls hipsterdom can’t be easy, and yet Coupleskate manages to pull off the feat—”Don’t Scare the Horses” proves to be the record that now-aging indie-rockers wish they had owned for years.

“We wanted something really layered and lush, a little more complicated than the first EP, that was the idea,” Bauer says. “We were listening to a lot of things. At the time we were writing, that last Blonde Redhead record came out. We were listening to Interpol. We always had the idea of adding strings to it, but at the same time we wanted to keep the rough edges from our original sound, then just build on it. I think that we did that—there are parts of our record that are a little bit rough, then fleshes out with all the added instrumentation.”

The band took its time with the writing process and, to the album’s benefit, didn’t immediately leap into recording. “I think that we’ve learned what we’re capable of,” Bauer says of a newfound confidence. “I think you can plop out songs and they’re fine—sometimes when a song is new, it’s like, ‘OK, that’s a song.’ When a song becomes not so new, you realize there are so many things you could’ve done. It’s infinite—the options are endless. We went into this with the idea that a song evolves, so let’s get to a point where it’s fully fleshed out, instead of keeping with the idea that we started with.”

The band began writing in February of 2008, which certainly allowed ample time for the material to take shape, to alter, to change, if only for the band itself. “Yeah, maybe. Lyrically, definitely,” Bauer says. “It’s the process of something going from being new to not new. Everything’s exciting when it’s fresh. I don’t know. They always change for me, depending on the situation. You can listen to songs at one point in your life and they will have a certain meaning for you, but if you go back to some song you loved when you were 16, it sounds completely different to you.”

Coupleskate began with mostly Bauer’s songs, but since has become more of a collaborative project—”Foreign Exchange,” one of the highlights of “Don’t Scare the Horses,” did not come from her, and over last weekend the band shot a video for the song, in the same house in which the Kevin Bacon-starring supernatural thriller “Stir of Echoes” was filmed. (In fact, the shot above was taken at the house.) The band’s planning on an East Coast tour and hopes to hit some summer festivals this year, as well as begin writing for the next record.

Many make a bigger deal out of an all-girl rock band than necessary. You’d never hear one point out an all-guy band, of course, and Bauer does take some issue with the seemingly inevitable tag. “Yeah, I do actually,” she says. “I feel like I don’t even know what it means to be an all-girl band. People have preconceived notions of what that is. You know, we function as not an all-girl band, but as a rock band. I think that people think [with] an all-girl band, we’ll have all feminist theory in our songs. We don’t feel the need to do that. We’re not a riot grrl band. We just like to play music. We would rather the music speak for itself. I think by [emphasizing the gender] you’re implying that this is kind of a freakshow. ‘Girls don’t play music…look, they are!’ But that’s not the case!”