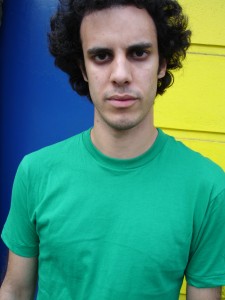 Like the sound of heaven on a skipping record, bit-crushed through a mid-eighties personal computer, glitching-out as its sixty-four bits of processing might attempt to process the ethereal chimes of another world…this is the sound of 2003’s “Rounds,” which simultaneously broke Four Tet as a critical darling and saddled him with the “folktronica” tag that would seemingly follow him throughout his prolific musical career.

But simply replicating the sounds of the clockwork of heaven’s cuckoo clocks wouldn’t be enough for man-behind-the-moniker Kieran Hebden, the former post-rocking member of Fridge who evolved his Four Tet sound into a darker, stranger beast in 2005’s “Everything Ecstatic,” only to strip it all down to the techno-influenced minimalism of last year’s “Ringer.”

The progression and growth of Four Tet all seems natural to Londoner Hebden, whose remixes are arguably as creative and varied as his productions. Madvillian, Matthew Dear, Born Ruffian, Andrew Bird and Radiohead have all benefited from his uniquely crafted retreads. And then there’s the four albums of material he’s cranked out with legendary jazz drummer Steve Reid, most recently “NYC.”

“I think each thing kind of enhances each other a bit,” explains Hebden from New York, where he’s trying to finish up his next Four Tet album. “To be out one week playing with Steve Reid doing more improvised kind of jazz-influenced music and then the next day be DJing at a techno club, and the next day be working on a remix for something with vocals…it means that everything I do feels kind of refreshing.”

Although he’s best known for being a producer and a performer, what’s been surprisingly refreshing to Hebden of late has been his DJing, which has seen him finish off a two-year residency for James Holden’s Border Community night at London’s recently shuttered club destination The End, and a new residency striking up at another London club, Plastic People.

“I’ve always been into dance music, but [DJing] kind of got me right back into it in some ways, and more submerged in it than I’ve ever been before-even the stuff that’s not designed maybe to even be played in the club, like the stuff I did with Steve Reid, or whatever. There are still rhythmic ideas forming with what I’m doing,” he explains as he delves deeper into his expectations for the next album.

“I think I’m picking up where ‘Ringer’ left off, but also exploring new things as well… I’m always trying to push into different areas and find things that are unique to my ears, and definitely [don’t] just repeat what I’ve already done.” Friendly, talkative and precise, Hebden pauses before continuing. “I think ‘Ringer’ got me into doing more synthesizer-stuff since then.”

Despite all of his talent and unique take on artistically crafted electronic music, Hebden has taken his fair share of criticism for his live performances, which can be maddening to some fans-to hear the most beautiful of his tracks teased-out for a few bars before being de-evolved into pure noise. Some might even say his Four Tet performances can be self-indulgent at times. Does he have an answer for those critics?

“The last one in Chicago was quite a particularly noisy one,” answers Hebden, sniffing out the source of the inquiry without flinching. “Night-by-night it would’ve been quite different depending on where my head was at that day… The stuff I’ve been doing recently has been kind of echoing the DJ stuff I’ve been doing… much more club-orientated. I’ve been playing tracks like fifteen-minute versions and really kind of stretched out. I think that’s come from the DJing a lot…my sets are changing all the time, and I think especially when people have seen it a couple times they kind of get their head around what I’m trying to do. There have been moments where some people have really gotten into certain aspects of one of my records and come along to the show just wanting to hear the record as it sounds, but I’ve never really been someone who’s been into that sort of thing. I like going to see acts live and if they play different from the record, I want to see exactly what they’re doing kind of now, you know?”

Sure we do. The wheels of gagallin keep rolling with Kieran’s musical evolution. Oh, and if you were wondering, that was Four Tet’s “Crawl, End Crawl” you were hearing at the end credits of the latest Bond flick “Quantum of Solace.”