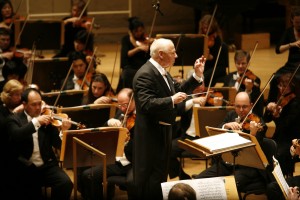 Anton Bruckner was a devout Roman Catholic who approached inspiration and composition as the reflection of a deep faith in God and as a practical expression of gratitude for the gift that the Almighty had bestowed upon him as a composer.  Yet despite his almost mystical religious convictions, he was also easily swayed by the opinions of others more down to earth concerning the value of his works, and was therefore forever in the process of revising them.  Although there are ten more or less complete symphonies of Bruckner (No. 9 was left unfinished at his death), Bruckner disavowed his original First Symphony, which is now known as Symphony No. “0,” and there are original and revised versions of almost every other Bruckner Symphony.  Bruckner made significant revisions to the first three movements of his Eighth Symphony, his longest, largest, and last completed symphony.  The changes and cuts were made on the basis of some hasty criticisms of conductor Hermann Levi, who had premiered Bruckner’s Seventh Symphony with great success, but Levi was unable to comprehend the vast sound world of the Eighth Symphony and felt that it needed to be rewritten.  This sent Bruckner into a deep funk whereupon he took up the task of dismantling the work’s first three movements virtually phrase by phrase.  It is that far more performed and familiar second revised version which Bernard Haitink will conduct at this week’s Chicago Symphony Orchestra concerts, an event which should be a very special experience indeed given Haitink’s long-time association with Bruckner and this monumental work.  (Dennis Polkow)