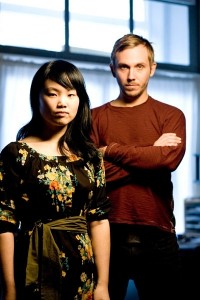 Chris McCaughan began writing Sundowner material while he wasn’t on tour or recording with his other band, Chicago-based punk band The Lawrence Arms. “I just started posting [the songs] for fun and then it dawned on me I had enough material for to make a record,” says McCaughan. So, with the help of Neil Hennessy, who plays drums with The Lawrence Arms, on bass and engineering duties, and Jenny Choi, from Sanawon, on cello, keys and vocals, the group recorded and released a record, “4152,” on Red Scare Records.

Even though McCaughan carries the same responsibilities—singer and guitarist—for both bands, Sundowner is completely different from The Lawrence Arms. For Sundowner, McCaughan has traded the fast-paced, angst-filled punk for somber, introspective acoustic songs. “I guess the sound just developed out of the tools I had initially, an acoustic and my voice.”

During the recording, McCaughan decided to leave drums out of the songs. He wanted the percussiveness of the movement on the acoustic strings to provide that rhythm, and it does. But nothing pertaining to Sundowner, according to McCaughan, is ever entirely ruled out, as a live drummer, Scott Anna, was added recently for the group’s first full-band show.

McCaughan credits his upbringing in the DIY punk scene for his ability to get beyond the coffee-shop stigma that is attached to many acoustic singer-songwriter acts. “One of the main things I’ve learned is how to play anywhere. I can play in the coffee shops and the bars and the clubs and the house or the garage or the kitchen or wherever.”

All of that aside, though, he acknowledges that the most important aspect is the act of simply writing songs that audiences like and can relate to and with lyrics that touch on universal themes such as “nostalgic heartbreak, lonesomeness and disconnectedness,” as described by McCaughan. Sundowner’s sad, lonely tunes are relatable to just about anyone. (Todd Miller)