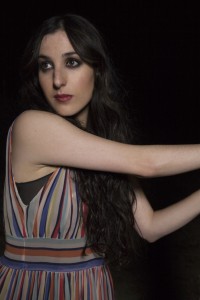 Boston songwriter Marissa Nadler broke through with 2007’s “Songs III: Bird on the Water,” her third full-length, which earned the artist heaps of critical acclaim as writers and fans alike became hopelessly lost in her ethereal, otherworldly voice. The haunting and gothic presentation of Nadler’s material borders on supernatural in its wash of abundant reverb, and her acoustic-guitar plucking is the soundtrack to midnight—she’s a ghost in the forest, a shadow in a dream.

This is more than mere folk music, more than the confessions of a singer-songwriter, more than just a girl and a guitar. “Little Hells,” her new record, fourth in all, on Kemado, is the milestone work in the songwriter’s career, ten songs that collide and pull and embrace one another, a bundle cloaked in heartbreakingly gorgeous mystery. Nadler’s increased the stakes and added more instrumentation—pianos, electric guitars, organs and even percussion—and all of it, every single note played, every drum accompaniment, works to the album’s benefit. An atmosphere is created on “Little Hells,” of daring fragility, yes, but of elemental inner turmoil as well, of emotional conflict, of pain. Nadler’s made a lonesome, truthful record that isn’t weighed down by its own melancholy, but somehow elevated by it.

She’s never written a song as powerful and precious as “Ghosts & Lovers,” and the drifting “River of Dirt,” which is helped along with a drum beat that’s provocatively incessant and clumsily random, hosts some of record’s most devastating moments. (The only so-so track is “Loner,” on which Nadler is too obsessed with the organ.) Closer “Mistress”—with the lap steel adding even more ambiance—finds Nadler repeating the phrase “Goodbye misery,” and while the hook’s major-chord construction helps the sentiment suggest a bit of peace, Nadler’s angelic and whispery performance shows caution. The remarkable nuance she’s able to achieve brings a staggering record to an appropriately sublime close. The ending is earned.

“I knew I wanted to make a record that was different from the other records—I felt like I was ready for a little change,” Nadler says. “I wanted to maintain the quality of my body of work, but experiment sonically. The addition of percussion was the one big drastic change for me. I had hardly ever played with a drummer before… But this isn’t like a Dylan-going-electric kind of transformation. I don’t think anyone will be screaming Judas. It’s not that drastic, it’s just an expansion of the sound.”

Nadler admits to feeling some pressure in following-up “Songs III” after the attention it received. “Definitely,” she says, “but as much as it was critically acclaimed, I’m still living on couches and everything. People think that you’re doing really well just because they read about you in Vogue, they don’t know the reality of how hard it is to be able to make it. I’m not complaining—it’s a dream come true to be able to be an artist and to be respected as one.”

She continues, “In the beginning, when I started playing acoustic guitar, my brother had one in the house that was just around, and [I began playing it] not because I dreamed of being a folk singer, but because that was the instrument I learned first. I think sonically, from the first record, there’s been a heavy atmosphere I was going for, and this record I feel is closer to the music I want to make right now. That’s not to say I won’t go back—the next record might be a total roots record. I’m still young, I’m still growing.”

Nadler says that she’s grown more literal with her songwriting, that she’s no longer weaving fictional tales that hint at truth, but rather putting it out there autobiographically. “The writing style, on the first records, I truly did use a lot of poetic devices to tell stories,” she says. “On this record there’s a big change—on a lot of songs I’m no longer hiding under names like ‘Mayflower May’ [from her 2005 record “The Saga of Mayflower May”]. I’m pretty much in the first person, instead of seeing myself in different female roles. This record is confessional. I don’t feel the need to impress people with my vocabulary. It’s not a pretentiously written record, I just say everything simply.”

All that honesty can make an artist a little nervous. “I’m one of the most insecure people you’ll ever meet,” Nadler says. “It’s really hard to get up there alone with a guitar, and dispel the preconceived notion that you’re boring, that you’re just another chick with a guitar. It’s hard too as a female, because there’s all sorts of other pressure you run into. In addition to playing a good set, I have to look hot. And that sucks. It’s kind of a drag.”

She says her confidence is building however, ever so slowly. “I do think I’ve become more confident. Maybe jaded and misanthropic. I just don’t care anymore. I’m 27 but I feel 50 or 70.” She laughs. “I’m not misanthropic. That’s the wrong word. It’s just that I don’t expect everybody to like me anymore. I’m OK with rejection. I’m just gonna write the songs I’m gonna write. Try to make art that I can live with for the rest of my life, because in the end, that’s all you have.”