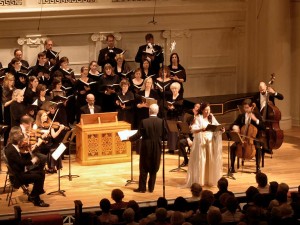 The thirty-five-plus years since the Evanston-based Bach Week began have seen enormous changes to the Baroque landscape in the area; numerous early music ensembles who would perform Bach regularly have come and gone (City Musick, Basically Bach), or have remained, having abandoned their original missions and repertoires (Music of the Baroque).  Despite the annual spring Bach Week being recession-reduced to a mere Bach weekend and the bad puns that such desperate times apparently generate—this year’s festival is called “Yes, we cantata”—you’ll actually have more Bach for your buck than in past years since every piece performed this year will be by Johann Sebastian Bach rather than including generous helpings of music by his mediocre sons, contemporaries and influences.  Chicago keyboardist extraordinaire David Schrader will kick off this year’s two-concert festival on Friday night with a solo harpsichord recital that will include the Prelude & Fugue in a minor (BWV 894), the “Capriccio on the departure of his beloved brother,” the Toccata in c minor (BWV 911), the Partita No. 1 in B-flat Major (BWV 825), Variations on “O Gott, du frommer Gott,” (“O God, thou faithful God”) and the Chromatic Fantasy & Fugue in d minor (BWV 903).  The Sunday night concert, co-sponsored by the German Consulate General and in part conducted by longtime Bach Week music director Richard Webster, features the joyous Easter cantata BWV 51 “Jauchzet Gott in allen Landen!” (“Rejoice unto God in all lands!”) with soprano Patrice Michaels and Chicago Symphony Orchestra principal trumpeter Christopher Martin.  CSO oboist Michael Henoch will be featured in the Concerto for oboe d’amore (BWV 1055), a baroque instrument that includes a bulb bell, and CSO cellist Katinka Kleijn will perform the First Cello Suite while the Bach Week Festival Chorus will be spotlighted in the Bach motet for double chorus, “Der Geist hilft unser Schwachheit auf” (“The Spirit comes to the aid of our weakness”) and the Brandenburg Concerto No. 5 will close out the evening with David Schrader taking on the harpsichord solo.  (Dennis Polkow)