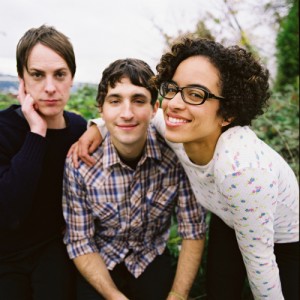 The silly undertaking of defining The Thermals’ sound or genre leaves you unsatisfied no matter what the conclusion. “Indie rock” is too vague, “indie punk” comes with too many youthful implications and “post-pop-punk” just sounds stupid. Perhaps it’s a compliment to the band then, that it defies categorization and exists in its own world of angst, vigor and power chords.

The Portland trio—founders Hutch Harris and Kathy Foster, plus drummer Westin Glass—has four records, 2003 debut “More Parts Per Million,” 2004’s “Fuckin A,” “The Body, The Blood, The Machine” from 2006 and this year’s debut on Kill Rock Stars, “Now We Can See.” While “More Parts” and “Fuckin A” helped build a steady buzz behind the band’s strangely articulate and specific assault, “The Body, The Blood, The Machine,” the last record the band did for Sub Pop, drew considerable attention for its lyrically conceptual storytelling—a scathing attack of the Christian establishment—set against the backdrop of catchy pop mania, led by Harris’ anti-punk, bookish and outright nerdy voice. The record’s success lied in Harris’ cleverly constructed poetics; it’s a record of escape, yes, but no one can escape a good songwriter’s wrath.

“Now We Can See,” another themed record, can also be pegged as an album of escape, some would say the greatest escape of them all-death. Harris settles into the afterlife lacking both the fire and brimstone of religious texts and the sentimental trash of certain bestselling novels. Theoretical, analytical and (hush) philosophical, his narrator looks back on a life lived and practically shrugs. Songs like opener “When I Died,” “I Let It Go,” “When We Were Alive,” “When I Was Afraid” and the title track bubble over with fascinating verve. The musical simplicity is the charm; the lyrical complexity is the brain. These are big questions, and answers are meaningless. Harris is aware we’ll all know everything when we get there soon enough.

“With ‘The Body, The Blood’ I wrote the lyrics to [opener] ‘Here’s Your Future’ first, and as soon as I wrote it, it opened up the door to all the themes we went with on the last record, just with the politics and the Christian fascism and the end of the world,” Harris says of how he gets on these conceptual tracks. “With this record, I wrote the lyrics for ‘When We Were Alive,’ and then that seemed like an interesting place to stay, to write from the point of view of someone who is at the end of his life, and writing it from the point of view of the afterlife.”

He insists the thematic impulse came by accident. “Well, it was just an accident on the last one,” he says. “Now I feel like it’s necessary. Or maybe I just enjoy it all. We’re still into the idea of making records as one complete piece, not a collection of singles. It’s really a 1970s idea of an album, something you put on and listen to from start to finish, therefore having themes in the lyrics as a way to tie all the songs together. I feel like, even if the records we make are less obvious with it, it’s something I want to keep doing. It adds another level to the whole idea of the album experience.”

The first overwhelming impression taken from Thermals records—at least the last two—is the vocal mix. While the band thunders away in tightly woven punk mayhem, Harris’ voice is presented cleanly and crisply, hovering over the music as if he’s more of a narrator than a vocalist. If that sounds amateurish, it isn’t. In fact, it’s exactly the point.

“That’s exactly what we’re going for,” Harris says. “Basically we’re just playing catchy, whatever, pop-punk songs that are catchy and fun, but now they can stand up to analysis, you know? If you just take songs at the surface they can be fun pop songs, but if you really dig deeper actually into a lot of the lyrics [there’s more]. In most rock bands, the lyrics should be up front. It’s really a lot of what people are relating to, what they’re listening to. We’re hoping people are gonna sing along. It’s really aggravating to me when I can’t tell what the lyrics are because they’re too buried. I really want the lyrics right in peoples’ faces.”

With all the snarking and hollering, you’d think Harris was intent on leading a disgruntled existence. “I used to call it the angry pen,” he says. “A lot of people are really upbeat, but when you go to write, anger comes out. For a lot of people the darkness will come out. A lot of that is wanting to make a statement, wanting to think what you’re doing is important, and for me that just leads to singing stuff I’m angry about. I think that’s okay. I think that’s honest. I think that there’s a lot of things you try not to think about too much, to not premeditate. You want it to be real, for lack of a better word.”

This has lead him to becoming a better songwriter. “I think I’ve just kind of been working on the craft. I feel like I could always get better. One song that I’m proud of is ‘When I Died’—the melodies are catchy, the lyrics are smart, the rhyme schemes are super tight… I listen to a lot of hip-hop. I feel like listening to Jay-Z for years, [learning] a lot about rhyming and how it flows, how lyrics can be catchy regardless of the melody or content, and how words sound together when they play off each other. Rhyming is important in songs-at least to me it is-and Jay-Z shows that there are a lot of words that don’t look like they rhyme on paper, but you can twist things around to make them work for you. You can only rhyme ‘love’ and ‘above’ and ‘dance’ and ‘chance’ so many times. If I hear another song that rhymes ‘love’ and ‘above’ I’m gonna fucking throw up.”