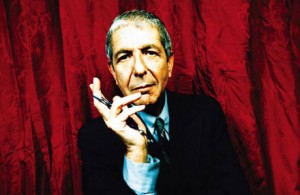 I have an ongoing debate with a friend of mine over whose cover of “Hallelujah” is better—Jeff Buckley’s or that of John Cale. It’s a fun argument, if a little silly, as clearly it’s Buckley’s (ah-ha! Last word, I win). One of the most influential songwriters of our time, the 74-year-old Leonard Cohen tours for the first time in fifteen years, following years in seclusion, plus a high-profile civil case that was the result of him being swindled out of millions from a former manager. Needless to say, this is an essential show that should be attended (if you can score a ticket, of course, as both nights sold-out, um, really fast). The man behind classic songs like the aforementioned “Hallelujah” and the near mystical “Everybody Knows”—plus classic records like 1967’s “Songs of Leonard Cohen” and 1988’s “I’m Your Man”—simply can’t be compared to other North American artists. Dark, soul-searching, oddball—Cohen has done it all, from deep psychology to religion to painful love. Bono adores him, which is annoying, but Lou Reed adores him too, which is cool. (Funny how that works.) Progressive, experimental, genius, trailblazing, monumental—all tags that fit Cohen comfortably. Reports indicate that hearing Cohen perform “Hallelujah” is the closest you’ll get to revelation these days. I don’t doubt it one bit. (Tom Lynch)