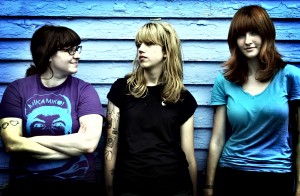 When Mauled by Tigers released Vivian Girls’ debut record last year, it pressed 500 copies, which sold out in ten days. Soon copies of the album were popping up on eBay and auctioning for upwards of fifty bucks. In the Red jumped on it, re-released the self-titled record in October and gave everyone else a chance to hear it—ten lashing lo-fi rock ‘n’ roll gems, part 1960s girl group, part riot grrl, part flammable punk rock, all clocking in at about twenty-two minutes. It sounds like the Wipers collided with The Shangri-Las and came out covered in tattoos.

The Brooklyn three-piece—comprised of Cassie Ramone, Katy Kickball and Ali Koehler, now on tour with the Crystal Antlers—just finished its follow-up record, titled “Everything Goes Wrong,” to be released this September, again on In the Red.

“We still love those songs,” Cassie says of the debut record, “like, sometimes I listen back to the record. But personally I like the new record, it’s way better than the first album. It’s like, ‘Oh wow, this was recorded a while ago,’ you know what I mean? We’ve learned a lot since then—[back then] we didn’t know as much about recording or even our own instruments, so it sounds amateurish to us. We still like it, though. It’s like looking back at a picture of you when you were younger.”

The band’s experiences over the last year has changed its vision of what it should be. “At first we viewed the band as a fun-time party thing,” Cassie says. “Now we view it as a career. It’s changed our perspective. We’re tighter, playing together. We’re better musicians. It’s just made us think about playing music in a different way.”

No one was more surprised by the lightning-fast success of the band than the girls themselves. “We were totally taken aback,” Cassie says. “It was mind-blowing to us. Mauled by Tigers, they were like, ‘We’re gonna press 300,’ and we were like, ‘Oh, that’s cool.’ ‘No, actually 500,’ ‘Oh. Well, that’s a lot, I don’t even know if anyone will buy this.’ It totally took us by surprise, but it was like, the best surprise ever. Like a surprise party.”