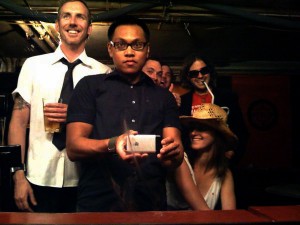 Brent Pulse and Lizz Kannenberg attended the same Wilco concert in the fall of 2006, and on the way home, on the L train, they met. The two began discussing music. Brent had been playing saxophone and keys in a funk band and Lizz had been playing bass in a punk band at the time. “We decided to do something that was totally unrelated to either and we got Grammar,” says Kannenberg. The two newly acquainted musicians then began playing together. They also recruited other available friends, Jonathan Sarmiento on drums and accordion, P. Griffin Baron on guitar and Dan Moulder on keys, cementing the rest of Grammar’s lineup.

Initially, the group was playing songs that Pulse had written as solo material. The band would go in and reformatted them to work in a full band scenario, sometimes staying true to how it had originally been written and other times, reworking it entirely. The same collaborative process applies to when Kannenberg brings in a song that she has written. “The good part about this band is that we are all totally open to that. There’s very little individual ego. We’ve all been in enough bands to know that it doesn’t work unless you are able to check your ego at the door and do what’s best for the band and not for yourself,” says Kannenberg.

Pulse began working with music in high school, producing hip-hop songs. “I used to write with the MCs I would work with, so I focused a lot on lyrics, I still do. There’s a certain way that MCs work at writing lyrics opposed to the way songwriters do,” Pulse says. “There is a lot of clever wordplay. I think I still have a lot of that with me.” He also approaches songwriting from a different angle, a method that he attributes to what he learned while writing hip-hip music. Instead of writing guitar chords around lyrics or lyrics around chords, he starts with the percussion and then moves to bass, writing the guitar chords around the established rhythm of the song.

All of the members have also studied music theory either in schools or through independent study, something that Kannenberg sees as valuable tool. “It’s pretty exciting to be able to pick apart what we’re doing and figure out how it can be better without losing the spirit of the stuff we’re trying to play.”

While the band’s currently available recordings, according to Kannenberg, “have a sort of lo-fi, bedroom-pop feeling to them,” mostly based around acoustic guitars and keys, the band is currently in the process of booking studio time to record a new single to be released later this year. The song will be entitled, “The End,” and it was the first song that the band wrote entirely together. “I think the next record will have a much fuller band sound,” says Kannenberg.

In the mean time, the band is planning to continue writing for its upcoming record. They will also be touring to the east coast in the fall as well as making an appearance at CMJ in New York. (Todd Miller)