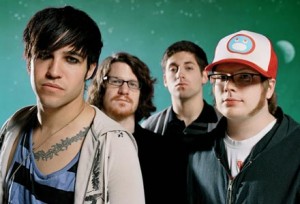 I feel a tinge of pity for Wilmette-bred pop-punk whinebags Fall Out Boy, because from here on out, they’ll be unable to release a record without conjuring prejudices against paparazzi boytoy/bassist Pete Wentz, his marriage to Ashlee Simpson and the fact that they had the gall to name their baby Bronx Mowgli, quite possibly the ugliest name ever written. Seeing as few could personally relate to whatever Wentz could possibly pen, and that the rest of the band has a solid track record of pushing the same old overly compressed power chords and paint-by-numbers pop-punk progression, Wentz’s and the boy’s newest record “Folie a Deux” was inherently doomed from the get-go. Melodically speaking, I give lead singer Patrick Stump credit for salvaging Wentz’s incongruous lyrical garbage (“Boycott Love,” then two songs later, “the sunshine gleams from your wedding band”), but his “falsetto every other line” approach has been grating throughout Fall Out Boy’s existence, and still is. “Folie a Deux” attempts to wow through pure grandeur, fronting terribly out-of-place orchestral arrangements, and a gut-wrenching cameo from Elvis Costello, a moment that will totally blindside you in horror should you not be expecting it (“no, Elvis, it’s a trap!”). But it’s all smoke and mirrors, there’s nothing here, aside from the strings and horns, that separates Fall Out Boy from modest pop-punk acts like Motion City Soundtrack. Maybe the result isn’t “please, somebody shoot me in the face” bad, but it’s still “will somebody please turn this shit off?” bad. (Andy Seifert)