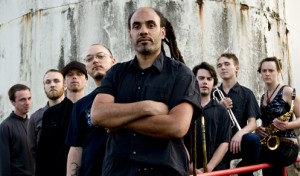 On its latest studio album, entitled “Amplify” (Easy Star Records), this Boston-bred eight-piece band reemerges (almost) from the ashes with a fresh collection of tunes that goes beyond its reggae roots, borrowing from reggaeton, hip-hop and other genres without compromising its signature sound. Among the various highlights is “Speak of The Devil,” a straightforward but catchy tune that features Midnite’s Vaughn Benjamin on vocals. Though John Brown’s Body has been around for over a decade, it recently went through  a considerable lineup change since the passing of bassist Scott Palmer from cancer in 2006. At that time the band almost disintegrated, leaving drummer Tommy Benedetti and co-singer/songwriter Elliot Martin—the band’s only remaining original members—to re-create to its current form. The group is now touring in support of “Re-Amplify,” a collection of remixes of the latest disc that takes the music to yet another inspired direction. (Ernest Barteldes)