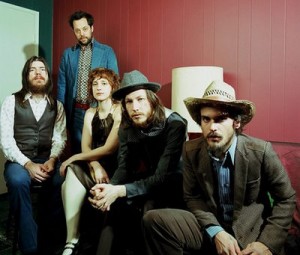 An indie-folk band named after a particular type of tropical grass? Well, you know what you’re getting yourself into. Andy Cabic—the main man behind the band—has toured and worked with Devendra Banhart and Joanna Newsom in the past, which makes sense too. “Tight Knit,” Veviter’s new record, is Cabic’s first on Sub Pop, and it’s an engrossing, breezy experience that’s as humble and warm as it is tenderly annoying. Sabic’s voice rarely stretches above a glorified whisper, and the tunes keep an upbeat pace for the most part, acoustic guitars swerving in and out of each other and basslines and drum parts keeping their distance. Veviter’s output has to this point been dreamy, soft and utterly boring, and “Tight Knit” makes no attempt to alter the path. That said, Cabic’s able to offer a pillow for your aching head, and there’s much to be applauded in that regard. “Down from Above,” with its finger-picked acoustic guitar and ambient electric guitar feedback and effects spread over the background, invites you to close your eyes, empty your head and sleep. Preferably in the veviter grass. (Tom Lynch)