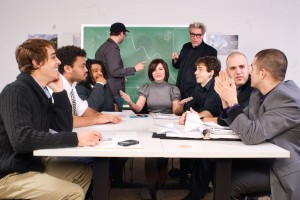 We’ve entered a strange and unpredictable time for independent music labels, and though that could really be said for any time in the history of rock music, it feels more immediate now with the morphing of the music industry into a digital behemoth and the whole economy-in-the-toilet thing. Local label Touch and Go’s recent announcement of consolidation was a swift kick in the chops for those in the business and those who are simply fans, a consequence that in many ways finally made the current crisis a reality for plenty outside the sphere. Things are changing, business models are shifting, and what’s here today could just as easily be gone by later today.

When a new compilation CD of local acts arrives on your desk with a press release that informs you it’s from AEMMP records, the student-run label out of Columbia College, a few questions arise. What are these students trying to accomplish with a twenty-one song, in some ways old-school, comp? In these tumultuous times, what can the instructors and supervisors imbue in their students other than that when they graduate college, they’re entering the worst job market in a generation, and a music industry that’s become less and less dependent on label representation? Threatened by full economic collapse and the implications that would have on the music industry and the arts world at large, what do these kids expect from any of this?

Polygram Records’ Irwin Steinberg and Down Beat magazine publisher Chuck Suber founded AEMMP (Arts, Entertainment & Media Management Program) in 1982 and has since had several releases, notably by artists The Bad Examples and A.T.M. As an avenue for students in the music-business concentration, the course’s mission has always been to provide a hands-on experience for its students, covering everything from certain procedures to decision-making on issues of talent selection, marketing, promotion, manufacturing and so on. Also, up until now, AEMMP has selected one artist to promote each year, a method, I’m told, that has more than once left the class with nothing tangible in hand once instruction had ceased. (Damn rock bands, so unreliable sometimes.) When author, label owner and former member of bands Public Image Ltd., Ministry, Pigface and Killing Joke Martin Atkins and music publicity firm Riot Act Media founder David Lewis took over as supervisors of AEMMP a year ago, they aimed to immediately reinvent the label. They knew they needed to shake things up. 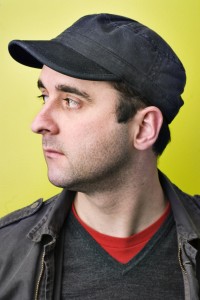 Entering the classroom in the school’s 623 South Wabash building on the third floor mid-session, it’s obvious that this is no traditional college course. Lewis sits at the front of the class and works the enlarged computer screen, sure, but it’s almost as if the inmates have taken over the asylum—in a good way. The class—seven students in all, all male save for one, Lauren Hoffman, who’s absent tonight to the dismay of her fellow label-men—discuss the upcoming release show for the comp at Reggie’s, the logistics of communicating with one another during the night, the t-shirts that still need to be ordered, the RSVPs from artists. One student, Ronny Sage, tries to convince the class to purchase walkie-talkies for the evening. Lewis guides his students when they veer off course but admirably allows them to sort out issues and debate on their own. An excitement hovers as a destination’s in sight; CDs are in hand, just one more step, one more assignment, a rock show.  Atkins isn’t here either—a throwaway discussion reveals some worry that he’s caught the swine flu.

“I think as an educator, the only thing that makes sense to me, is that, OK, you have this great foundational learning, but in theory you have to go out and do it. If you’re a music-business professional and you’re interested in that and you learn about licensing and public relations and whatever else, it doesn’t really make sense until you actually deal with flighty artists, asshole managers and the logistics of it,” Lewis says, as he and his class sit around a small white table in their classroom. “Until you actually do it, it’s abstract. I don’t think I would teach a record-label lecture. I don’t know what I would say. I would run out of stuff in the first two days. Like, ‘It’s a clusterfuck, uh, good luck.'”

All of the students agree that, along with the hands-on-experience, Lewis and Atkins were a major part of why they enrolled in the class in the first place. “I think it was the idea of the re-brand, doing something different with the label, and with the people that are involved,” says Nick Terry. “When I was originally talked to by David and Martin, they explained what their background in music was and that was something that was really appealing to me. I think they’re a huge influence on why I took this class.”

During the course’s first semester, Lewis and Atkins discussed the major points of label-running, to give their workforce a basic understanding of how an independent label is operated, and to decide what to work towards. A compilation CD was agreed on relatively quickly—in an effort to reach the widest audience possible and set a foundation for the future of AEMMP by creating relationships with local artists—and each set out to invite bands to contribute. Given that they’re all local, no surprise the AEMMP students personally knew several of the artists and were referred to even more. In little time, dozens and dozens of artists had been contacted. Along the way, after each student displayed his or her personal strengths, each took on separate roles and responsibilities. One in charge of public relations, one in charge of marketing, one of the Web site, for instance. In essence, Lewis and Atkins had given their students more than just a hands-on experience, much more than just a really good internship—this was indeed a label, operated and handled as such.

“The first semester we learned a lot,” says Mark Kucera, “and the second semester was work, where we were pushing out what we had taken in.”

“The best thing for me in this class,” Lewis says, “is that over winter break, none of these guys got credit, and Martin and I didn’t get paid at all, but we all met. We still met every Thursday, and there was that moment when you realized that this thing’s sort of grown.”

At first, the class aimed big. The list of artists to invite included Fall Out Boy and Lupe Fiasco. In a prime example of the real-world experience, Zak Jablow, a good friend of the hip-hop duo The Cool Kids, had contacted them and gotten an OK, only to be shot down shortly after by their manager. Still, they assembled a respectable list of artists for the compilation, which includes contributions from Office, Walter Meego, Bob Nanna, The Dials, Maps & Atlases, Owen and David Costa is Dead, among others.

“The was really cool for me too,” says Kucera. “I’m a big Hey Mercedes fan, and I got his email address, and I was able to talk to Bob Nanna, and these other bands I have been listening to since I was a teenager. So, it’s business, but it’s also cool. I feel like a little schoolgirl sometimes. It’s like, ‘Wow, I got this guy’s email address and he’s the singer in one of my favorite bands.'”

“It’s always good to give Chicago music exposure in some capacity,” says Rebecca Crawford of The Dials. “Columbia being a teaching school of music academia, it seemed like a good idea. I like the idea of it being student-run—it seemed nice to support it. You got a good feel from them.”

Crawford, who works at the Reckless on Broadway, believes that having a collection of local acts can only help the scene. “I work at the record store, and we get random people from out of town who ask [us] to suggest Chicago music, and this is a good thing to have, here’s a sample of Chicago bands.” 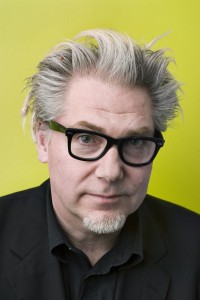 “I’m hoping in my own romantic way, two years from now when everyone’s juggling stuff, they’ll stumble across this album and stick it on and listen to some music and realize, ‘We did this. We made this happen. I can make something else happen,'” Martin Atkins says a few days later. “I think that’s really valuable and it’s an exciting thing to be a part of.”

Turns out, it was just a normal bug, not the dreaded oink. “I’m sure they thought it was hilarious that the guy from Pigface possibly had swine flu,” Atkins jokes of his class.

The differences between Lewis and Atkins must’ve created an entertaining course, to say the least—the boisterous Atkins admits he and Lewis, younger and more reserved, bookish even, butted heads more than once. The students certainly seem like they enjoyed the contrast of personalities. In the end, they did have a common goal. “Once I stopped butting heads with David,” Atkins says, “I started butting heads with the class.”

Atkins has even gone so far to ignite his students as to send them instructions on how to collect dog feces and make a buck “just to say, ‘Hey fuckos, this is you if you don’t do something extraordinary.'”

Both Lewis and Atkins—and the students themselves, which came as a bit of surprise—are realistic about what happens to the seven of them after graduation. No one thinks he’s getting a job at a label, or even in the music industry, immediately. Lewis emphasizes developing certain business skill sets, and that, essentially, these students are graduating with business-management degrees.

He continues, “I don’t think this is a case of making a record label relevant as a business opportunity in 2009, but it’s more a question of the learning opportunity it provides to channel energy into other areas.” 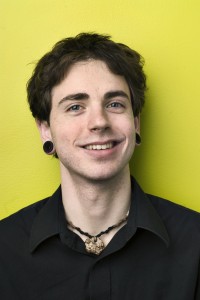 Working with a modest budget, they pressed 1,000 copies of their compilation, titled “Chompilation,” with artwork dominated by some sort of blue-green, deformed-yet-lovable beast. “If they sell out,” Baker (right) says, “we’ll be glad to order more.”

The students each make mention of working towards the label’s future, setting a standard for AEMMP to continue once their gone, and they’re already seeing a boost in interest on Columbia’s campus. “I’ve had friends approach me and be like, ‘Hey, when’s your album coming out, we’ve been hearing about it,'” says Vince Dawkins. “Through my four years at Columbia, we’ve heard of AEMMP Records and seen fliers, but I haven’t heard anyone actively say, ‘We have this coming out, we have a show happening.’ I haven’t experienced that much of a positive response from it until this year. I think that’s great, though, and I hope that will continue.”

For Atkins, he’s done with AEMMP. With several different creative and business ventures—including opening a brand new school, called Revolution Number Three, which will be officially announced this week—he’s got his hands full. Lewis will continue supervising AEMMP this summer with Justin Sinkovich, of Touch and Go and local band The Poison Arrows.

“With music, it just gets in your blood,” Lewis says. “There are moments where you’re like, ‘I hate it, there’s nothing good,’ and then you hear a song and you’ll get chills, and that’s the moment where you’re like, ‘I still care about music.’ It still has this potency and power. Music’s not gonna go anywhere… It’s been a really difficult, and a really exciting and rewarding year, and because of that I think that means we’re doing something right.”

[…] a huge success.  We found ourselves on Chicago Public Radio, in Time Out Chicago, on the cover of New City as the semester unfolded.  The year culminated in a massively successful show with a line of fans […]