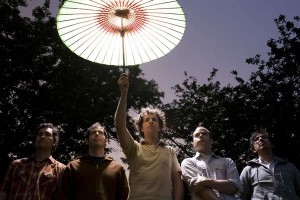 Gravity teaches us that what goes up must come down. Rock music teaches us that bands come and go. In our formative years, the dissolution of a beloved band hits as hard as a death of an extended family member—we mourn the loss, perhaps selfishly, without celebrating what we’ve gained, the fine overall experience, during the good times. What we have now can be gone in an instant, because, just as Thom Yorke once crooned, gravity always wins.

In Tom Stoppard’s play “Rock ‘n’ Roll,” which opens this week at the Goodman Theatre, a lead character, Jan, a Czech student and scholar of rock music, briefly reflects on the disbanding of underground Prague band The Plastic People of the Universe. While the group’s adjournment in the text represents much more than just the closing of a great rock band, of course, there’s a remarkable, show-stopping devastation heard in Jan’s voice as he weakly ruminates, “There are no more Plastics.”

For me, the first band to split up that I unconditionally loved was Pavement. In 1999, my senior year of high school, the band released its fifth record proper, “Terror Twilight,” which would be its last. I saw the band play Metro with U.S. Maple a few weeks after the album’s release, and you could jar the tension emanating from onstage with a jackhammer. Everyone knew it was over—just consider the title of the record, after all. Pavement came back some months later, in the fall I believe, to The Vic, opened its set with “Shady Lane,” and plowed through an evening of old favorites, as if it were abundantly clear to everyone in the band, and everyone in the audience, that this was the final act. Shortly after, Pavement’s Web site was down, college had begun for me, and a decade of looking back, and of finding new and bewildering musical loves, was on the horizon.

Officially, local indie-rock band Chin Up Chin Up has three full-length releases, 2004’s “We Should Have Never Lived Like We Were Skyscrapers,” 2006’s “This Harness Can’t Ride Anything” and 2005’s self-titled re-release of the band’s debut, which boasts a few notable bonus tracks. The band made a somewhat immediate impression on the local scene after its birth, both for the intricate, intelligent structural design of its aural excursions, but also for singer Jeremy Bolen’s atypical pop voice; gruff, whispery, deep-register, at times it flat-out did not match with the music to which it was married, but somehow Bolen and crew found a way to make it work. Bolen’s lyrics, poetic, bittersweet and often ambiguously touching, certainly helped, at times elevating a three-minute rock song to an artwork.

In 2004, before the band even finished “Skyscrapers,”bassist Chris Saathoff was killed in a hit-and-run accident outside Empty Bottle. Those around here know the story. The band decided to carry on, admirably, and eventually created its best work in “Harness.” With its tragic history, Chin Up Chin Up quickly, and certainly without asking for it, became a band to cheer for, one that you wanted to see succeed. It seemed at the time the group was on the tip of many tongues, and yeah, sure, it helped that they didn’t suck.

Bolen agrees of the time. “That is true,” he says of the city’s support after Saathoff’s death, “it was a turning point for us in every way. We really have had a lot of support from this city, and that has been amazing.”

After touring for most of 2007, playing upwards of 150 shows, and following a lengthy hiatus in 2008, the group officially decided to call it quits. “It just felt like it was time,” Bolen says. “Everyone’s lives were moving in different directions, and the general excitement and magic or whatever it is you have when you’re in a band, it just wasn’t there anymore.”

There doesn’t seem to be hard feelings. “I am happy that we were able to do so much, and be part of so many amazing things,” he says. “It’s sad that we couldn’t keep it together, but everyone adapts differently to everything, and because of that…it just has made it impossible for the band to really exist anymore.”

Bolen, for one, has moved on to other things; he’s a photographer (he’s shot some stuff for Newcity), and he’s jump-started a new musical endeavor, the promising Vacations, with fellow CUCU member Greg Sharp and Joan of Arc member Bobby Burg. Chin Up Chin Up scheduled a finale show this Friday at Empty Bottle, as a way to say goodbye, one would imagine, to a supportive community who’s witnessed a local band survive so much.

What has Bolen learned from the experience? “Be with the ones you love, don’t eat fast food three times in one day, read ‘Healthy Highways’ and always have AAA,” he says.

What have we learned? To always keep our chin up.