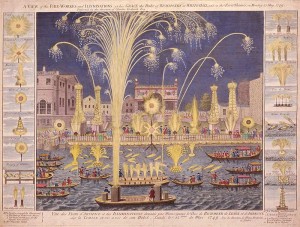 It’s nice to see Music of the Baroque end its current season with music of the, uh, Baroque.  Yes, there are a couple of late Haydn symphonies, clearly over the line of the Classical era that have formed the bulk of the group’s repertoire since Mozart conductor Jane Glover took over the group a few seasons ago (principal guest conductor Nicholas Kraemer will conduct this program), but is the music of Handel that will take the spotlight on this program, especially his “Music for the Royal Fireworks” that was written in 1749 to serve as accompaniment for a spectacular royal fireworks display celebrating the Peace of Aix-la-Chapelle where pyrotechnicians and set designers from across Europe converged on London to put on a show of all shows.  Of course, achieving color in fireworks did not develop until later, so the “color” was provided by the elaborate scenery and music.  Also included is Handel’s Concerto a due cori No. 2 in F Major, HWV 333 for double wind choir. (Dennis Polkow)