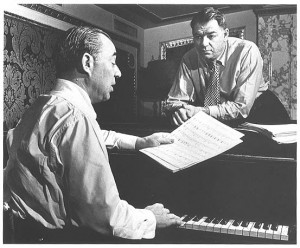 Richard Rodgers had been writing songs with Lorenz Hart for years for various musical comedies, revues and movies, and the team had experimented with incorporating dance in the 1930s with a then-young choreographer named George Balanchine. They were also concerned about transitions from dialogue to music, and began the use of talking to music as a prologue to a musical number. Even so, and as wonderful as so many of those old Rodgers and Hart songs still are today, the style of the time dictated that the songs were often unrelated to the play itself, or to any particular drama within the play. When Hart’s alcoholism became so bad that he was no longer able to work—Rodgers had always said that he would have gone on working with Hart forever if it were possible—Rodgers teamed up with the successful playwright Oscar Hammerstein II who, among other things, had written “Show Boat” with composer Jerome Kern. Together, Rodgers and Hammerstein created a new, uniquely American art form: the musical, or “musical theater,” as they termed it, where every song advanced the story and every dance was done in character, and where the line between music and drama was so magnificently blurred that you never knew when dialogue might turn into song, or when action would turn into dance.  Fascinatingly, neither saw their shows as having anything to do with movies, at least initially.  For one thing, their first show “Oklahoma!” went on playing and touring so successfully for so long that a film version might actually compete with the live show. But both saw film as such a different beast that they were shrewd and careful about how they entered the medium, composing 1945’s “State Fair” as a Technicolor musical direct for the screen and holding out on the screen rights to their stage shows until each had closed on Broadway, had exhaustively toured and always mandating creative control.  How much control did the pair have over these films?  So much that when Rodgers was unhappy with Frank Sinatra’s pre-recording of the famous “Soliloquy” for “Carousel,” which Sinatra was contracted to star in, Ol’ Blue Eyes mysteriously resigned from the film.  Scenes from six classic R&H films—”State Fair,” “Oklahoma!” “Carousel,” “South Pacific,” “The King and I” and “The Sound of Music”—will be screened with live accompaniment from the Chicago Symphony Orchestra under Emil de Cou.  (Dennis Polkow)