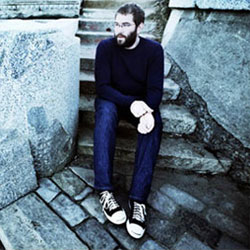 The Casiotone SK-1 is the instrument of choice for Owen Ashworth. It has been dubbed the “poor man’s sampler” and you can see old Ferris-Beuler-style commercials circa 1985 online. If anything, the ad is worth looking up because the thirty-two piano keys are so small. Popularized in the 1990s as an affordable (at the time, $100) household instrument for the family, the Casiotone is known for its lo-fi aesthetic—offering immediate entertainment in as much as one might record the squeal of a sneaker (among other things) and then play “Three Blind Mice” with said sound byte. Thus, using the SK-1 as a centerpiece for a band is pretty awesome.

Owen Ashworth has been making music under the moniker Casiotone For the Painfully Alone since 1997. During that time he has released an impressive collection of seven records, not the least of which are his latest two, a compilation “Advance Battery Base Life” and new full-length “Vs. Children.” Originally all of the music was produced on the small battery-powered keyboard. Upon discovering “the organ sound,” the built-in drum machine and an introductory piano class at San Francisco State University, Ashworth started writing songs. “I only played the songs for a few people, but one of my friends liked them enough to coax me into opening a show that she had booked for a few other local bands…the next thing I knew I had a band.”

Since its inception, Ashworth has carved out somber, nostalgic pop with strong, often serious lyrics that buoy the compositions above what could otherwise collapse into irony and kitsch. It’s as if he uses the toys of high school to express the pangs of adulthood. In his recent albums, Ashworth has incorporated other instruments, expanding the concept into a fuller sound, such that the soloist is not quite so stranded in the lo-fi soundscape of drumbeats and short-lived keys. He has added an organ, a proper piano, a guitar and drums—the Casiotone, however, remains central.

CFTPA presents a reflective mood that is both self-aware and wry. In many cases, Ashworth writes for other singers and personas. “The songs are written with characters in mind. I’ve used different singers at different times to reinforce the character aspect of the songs.” He works like a director, adopting perspectives that combine into a world to themselves. It makes sense, therefore, that he would have composed the music for Laurel Nakadata’s film “Stay the Same Never Change,” which debuted at Sundance this year, a feature about Kansas City women dealing with their ranging and perhaps displaced desire for affection.

Additionally, geography plays an important role and each song on the track list is associated with the place in which it, or some part of it, was recorded; France, for instance, or Vancouver, Portland, San Diego, Redwood City, Berkeley, Vermont, Libertyville and even Missoula. It’s a broad map of audio postcards. “I’ve always liked songs about specific places,” Ashworth says. “Songs can make any place feel a little bit more like home, and they can feel like souvenirs of that place when you’re away.” At the same time, Ashworth doesn’t necessarily have to be in a place in order to associate a song with it. “I haven’t actually recorded in France,” he admits. “Julie Lispector recorded her vocal part for one of my songs at home in France and she emailed me the track. I’m pretty sure everything I’ve recorded has been in the U.S., either in my home or the home of a friend.”

Throughout “Advance Battery Base Life” and “Vs. Children,” Ashworth creates a pastiche of characters, geography and time—borrowing from “Where the Saints Come Marching In,” or covering “Graceland.“ It’s a vibrant and ranging enthusiasm well worth checking out.

Casiotone for the Painfully Alone plays May 28 at the Hideout.

@ The Hideout: A Note On Casiotone « The Green Lantern Press

[…] This was originally published by Newcity. You can read the entire article by going here. […]