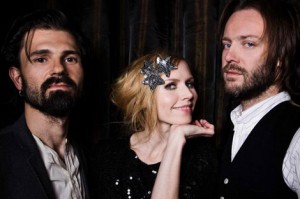 With A Camp, Nina Persson will steal your heart once again, as she has time after time with The Cardigans. The lovely orchestral pop, fronted by Persson’s crisp and often immaculate voice, stretches over twelve sonically joyous, thematically introspective songs on the band’s debut, “Colonia.” On the opening track, the swift and poetic “The Crowning,” Persson’s performance is so assured and confident that she’s able to pull off the line “We’re gonna party like it’s 1699” without sounding silly, and the record’s first single, “Stronger Than Jesus,” hits you in an unexpected way that would take several thousand words for proper analysis and deconstruction. “Love Has Left the Room,” another stunner, features Persson’s soaring delivery to chilling effect, plus excellently assembled string accompaniment and a choral background. The record, comparable to Lucky Soul’s 2008 treasure “The Great Unwanted,” stands up to The Cardigans’ best work, namely 1995’s “Life” and 1996’s “First Band on the Moon.” For pure, pretty, expertly crafted pop, you can’t get much better. (Tom Lynch)