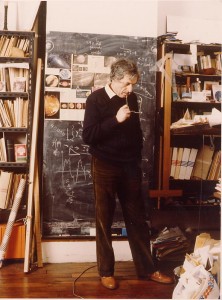 A unique twentieth-century presence, Greek visionary, composer, engineer, architect, philosopher and mathematician Iannis Xenakis’ influence remains uniquely felt across various disciplines eight years after his death.  His extreme use of angles in buildings have become signature sights of modernism, an angularity that often characterizes his music as well.  He somehow was able to straddle right brain and left brain by using mathematical formulas as the basis for music that also achieves a ritualistic and mystical quality to it.  Like Schoenberg early in the century, Xenakis created a new post-World War II vocabulary of sound that ultimately was appropriated by others yet never fully duplicated in its originality.  His music has been more widely known more by reputation than by performances, as Xenakis makes such extraordinary demands on performers—to say nothing of listeners—that only the most adventurous and virtuosic musicians program him.  The International Contemporary Ensemble and percussionist Steven Schick have made exploring Xenakis a performance pastime and are presenting the fruits of their labors in this all-Xenakis program that includes his “Psappha,” for solo percussion instruments of wood, metal and skins, “Echange,” a concerto for bass-clarinet and chamber ensemble that makes use of extended techniques, “Akanthos,” for soprano and chamber ensemble, “Palimspsete” for piano, drums, winds and strings, and the Chicago premiere of Xenakis’ final composition, “O-Mega.” (Dennis Polkow)