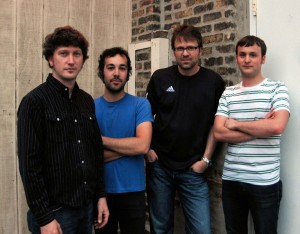 After a decade of playing guitar with The Redwalls, Andrew Langer has decided to step out on his own. Leaving a band that has seen the success that The Redwalls has may seem like a strange career move, but Langer sees it as a fresh slate, a chance to be the one person who is responsible for everything, good or bad. Under the name of The Sleeptalkers, he’s excited about having that responsibility.

Langer began writing material for the debut record from The Sleeptalkers in late 2008. “A majority of the songs were actually written in a three week period. It was just a couple of weeks where I was feeling very creative,” Langer says. After he wrote them, Langer drove to Kent, Ohio to record them with Todd Tobias, a producer and engineer who has worked with Guided By Voices and with Robert Pollard on his solo albums. “It was a really fun experience because I like all of the stuff he had done up until then.”

It’s the influence that Langer takes from bands like Guided By Voices, Sonic Youth, Pavement and Dinosaur Jr. that he feels distinguishes The Sleeptalkers’ sound from what he’s previously done with The Redwalls.

As well as engineering the recording, Tobias ended up playing bass during the sessions along with Jordan Kozer, formerly of The Redwalls, on drums. Langer taking the rest of the instrumental and vocal responsibilities.) A week later, the album was finished and Langer was back in Chicago with the task of putting together a band to play these songs in a live setting.

“The band has kind of been a revolving cast of musicians up to this point,” says Langer. “It’s cool because it kind of changes shape from show to show. Every one has a different feel or interpretation. I like tightness in bands, but I also appreciate [the shows] not being the same for people to come and watch every time.”

On the possibility of eventually cementing a more permanent group, Langer says that he isn’t in any hurry. “I’m enjoying being able to play with so many different musicians and getting different takes on how they feel about the songs rather than the same three or four people for every single song.”

After a brief trip to SXSW where the band had a chance opportunity to share the stage with Austin music legend Daniel Johnston and a positive reaction there and at another show in Fort Worth, Langer is ready to take his new band on the road, this time to New York, where he plans to play several shows later this summer.

As for the forth-coming full-length album, it is still untitled and waiting for a record label. In the mean time, Langer has released four of the tracks from the sessions with Tobias on an EP that is currently available. (Todd Miller)