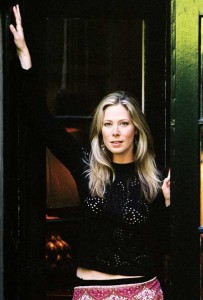 Peacock’s music embodies all the good qualities from the still burgeoning folk scene (think the intimacy of Dar Williams and the charming pop of Sheryl Crow), and “Love Remains” is no departure. The album ripples with personality as crisp guitars and sunny pedal-steel accent Peacock’s savory melodies and clever hooks. For the most part, the songs are bright and winsome, but lyrics concerning death and maturity are on full display.

“It has a real continuum of theme and arrangements,” Peacock says. “It’s about growing up.”

The songs are simple in their structure, never sounding over- or under- produced. Peacock says that while making the record, she and producer/band member Danny Myrick focused on the feeling and tempo, taking a step away from her previous album sound, which was “a lot more piano-based.”

The album opener, “All About Me,” is classic alt-country, with Peacock’s silky voice floating over punch-drunk guitar as she sings, “I never look back, like Jack Kerouac.” The catchy “Real Life” bustles with enthusiasm, opening with a jangling guitar riff and climaxing in a soaring chorus. On the title track, Peacock starts with a simple chord progression and uses her soulful vocals to produce a contemplative ballad about the timelessness of love.

Peacock says that for her, songwriting has always been about sincerity.

“If I’m really honest with myself as a writer, other people can smell that honesty,” Peacock says. “For me, music has always been a heart and a spirit thing.”

Her honesty and spirituality collide in the pensive, “If I Could Talk To God,” where Peacock sings, “Shouldn’t I spend my time on grander things/does it even make a difference anyway.”

One of Peacock’s biggest challenges is maintaining a positive attitude in a somewhat bleak music industry.

“Keeping that love for music alive and pure is hard when there’s a lot of bullshit,” Peacock says.

She constantly tells herself to “make it about the music,” and not to worry about radio or sales. For Peacock, music is about feeding the soul.

“If I’m not truly being who I am,” she says, “I’ll become a landscape architect.” (Josh Kraus)