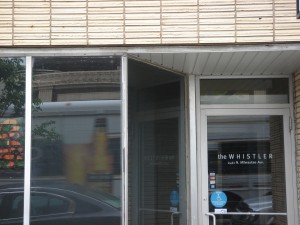 Consider all the prerequisites for a band to play a weekly gig at the same venue: the band must be local and find contentment in staying local for a while; the owner of the venue must enjoy the band (or the profits) enough to invite them back every week; the band has to be popular enough to bring in a consistent crowd, but not so popular that they could set off on tour; and the band must have a large, malleable set list to stay fresh each week. Plus, you have to imagine many acts are paid with free drinks—band must be down with that.

All things taken into account, it’s tough for any act to fit the “weekly gig” role, much less someone with that stature of LeRoy Bach, a guitarist/pianist instrumental on four of Wilco’s most beloved records—”Summerteeth,” “Mermaid Avenue,” “Yankee Hotel Foxtrot” and “A Ghost is Born”—before leaving the band in 2005, as well a touring musician with Iron & Wine and Beth Orton in subsequent years. But Logan Square’s The Whistler not only managed to nab Bach, but have him every Wednesday at 6:30pm. Which brings us to the next question: 6:30pm?

“I was looking for a venue where I could play earlier in the evening than the typical 10pm start time,” Bach says, explaining he was looking for a gig that wouldn’t lead to coming home at 3am. “I wanted to play some music earlier, and I was trying to consider certain rooms that were open at that hour, and could provide an atmosphere where I could bring this particular music and have it be appropriate. So I called up [The Whistler] and proposed this, and they happened to be contemplating something similar, how to have something going on earlier in the night before their bands start playing at ten o’clock. So we went for it.”

“Wednesday was a perfect day to for us to do that with LeRoy, because every Wednesday is jazz night at our place,” says Whistler co-owner Billy Helmkamp. “And that’s more of a mellow vibe, more of a cocktail night. I think we’re more known for the cocktails we do. That’s what we’re trying to project that night, so LeRoy kicking off things as he does sets a nice tone for the rest of the night.”

The Whistler—also an art gallery and a record label—was more than obliged to present Bach’s particular music: acoustic-guitar-only originals, with “counterpoint bass lines, chords happening with the melody,” but no vocals (though, perhaps a whistling section or two). Helmkamp paints the set as rather unobtrusive, made even more discreet by Bach’s decision to play sitting in a chair on the floor rather than up on the stage.

“That’s actually more a function of him wanting it to be low-key and relaxed, and not something that the patrons, when they come in, have to be quiet and watch him,” Helmkamp says, who says Bach’s Whistler material best compares to his Iron & Wine work. “He kinda wanted it be more background music, so that’s he not commanding you to watch him. ‘I’m sitting in the crowd’ is his thinking behind it.”

Bach says he has other, lyric-based material, but that’s there’s no record currently in the works, and that’s understandable—he’s a pretty busy guy. In addition to solo work, Bach’s involved in R&B cover band Baby Alright, bar-rock quartet Slick Conditions and an ensemble with Tortoise multi-instrumentalist Dan Bitney. But for the time being, Bach’s concentrating on the Whistler gigs.

“There’s a challenge to it, but I really enjoy weekly gigs,” he says. “If the club owners are sympathetic to having you on a weekly basis, I’m into it, I really like it. There’s something about a weekly gig where I think the idea is to generate something over time, whether that’s musical or social or financial or whatever. I think the weekly gig is more cumulative than something that’s a one-time gig, where the idea is bring in a big crowd for that one time.”

Still, a weekly, free 6:30pm gig at the Whistler is an enormous change of pace from Bach’s earlier career, from the rigorous itinerary of national and international tours, playing shows at daunting, sometimes immense venues in front of thousands of fans to a low-key, quiet solo acoustic set in Logan Square.