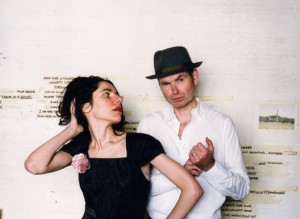 The first collaboration between Polly Jean Harvey and John Parish, 1996’s “Dance Hall at Louse Point,” made a bit of a splash and then was relatively forgotten, mostly because of the two songwriters’ work that followed. The two return all these years later with the strangely titled “A Woman A Man Walked By,” and the results are similar to their first project—compelling, haunting at times, but ultimately not as powerful as when either of them works separately. Harvey’s most recent “solo” record was 2007’s somber, piano-driven “White Chalk”; Parish’s was 2005’s memorable “Once Upon a Little Time.” Both are better records. Yet, “A Woman A Man Walked By,” which spans the spectrum of modern art rock, remains intriguing, if a little disappointing, just for the involvement of its two creators. Live, they’re both spectacular. (Tom Lynch)