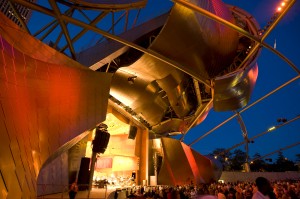 Although Mayor Anton Cermak had presented a one-time-only series of summer concerts in 1931, it was Chicago Federation of Musicians president James C. Petrillo who inaugurated a regular series in 1935, the year following the World’s Fair. This special gala concert recreates the very first program ever presented back on July 1, 1935, the first concert of the Grant Park Music Festival, showing how much music tastes have changed across nearly three-quarters of a century. Wagner is represented by the “Arrival of the Guests at the Wartburg” from “Tannhäuser,” an excerpt rarely heard today, and there are a couple of pieces still popular, such as Liszt’s Hungarian Rhapsody No. 2 and Johann Strauss II’s “On the Beautiful Blue Danube.” But most of this repertoire is long forgotten, including music by Thomas, Alfven, Glazunov, Powell, German and Meacham. Principal conductor Carlos Kalmar conducts. (Dennis Polkow)