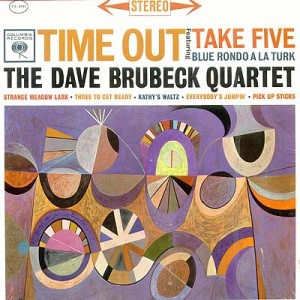 With Ravinia’s “Jazz in June” a thing of the past, Symphony Center is picking up some of the slack by offering this special summer appearance of the Dave Brubeck Quartet to celebrate the fiftieth anniversary of the most popular jazz album of all time, “Time Out” (Columbia). When it was first released in 1959, many didn’t know what to make of it at first with its abstract painting on the cover and its spotlight on changing meters and unusual time signatures. But tracks such as “Take Five” and “Blue Rondo à la Turk” became so popular that they became standard on jukeboxes; the single of “Take Five,” with its pulsating 5/4 time signature and Paul Desmond alto saxophone line, actually became the first million-seller jazz single since the swing era. The goal, according to Brubeck on a bonus DVD accompanying a three-disc fiftieth-anniversary re-release of the album, was to showcase time signatures not typically heard in jazz, something that Brubeck claims Paul Desmond was against, which may in part explain why Desmond plays so melodically and lyrically on the album, a wonderful contrast to Brubeck’s percussive pianism and his powerful rhythm section of bassist Eugene Wright and drummer Joe Morello. Virtually all of the album’s repertoire will be presented by Brubeck along with Bobby Militello on alto saxophone and flute, bassist Michael Moore and drummer Randy Jones. (Dennis Polkow)