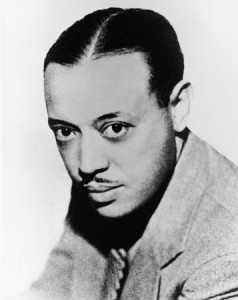 As the countdown to the Grant Park Music Festival’s seventy-fifth season anniversary winds down (see separate listing for July 1) and Taste of Chicago heats up, principal conductor Carlos Kalmar and the Grant Park Orchestra head indoors to the Harris Theater for a special concert celebrating American music from the decade of the opening of the Festival, the 1930s.  The centerpiece of the concert is a rare complete performance of William Grant Still’s “Afro-American” Symphony No. 1, the first symphonic work written by an African-American composer.  Still incorporated the same syncopated rhythm in the piece two years before that same rhythm was made famous by George Gershwin in his song, “I Got Rhythm.”  Gershwin himself will be represented by excerpts from his 1931 show “Of Thee I Sing,” considered the first Broadway political satire and the inspiration for the Marx Brothers’ “Duck Soup.”  Also on the program are William Schuman’s “American Festival Overture,” Samuel Barber’s “School for Scandal” Overture and Chicago composer Leo Sowerby’s “Prairie.”  (Dennis Polkow)