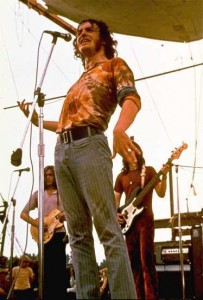 So you thought last year’s Police reunion, or a new U2 album, was nostalgic? Get ready for a fortieth-anniversary Woodstock “World’s Largest Lawn Party” at Ravinia with one of the most memorable of that legendary festival’s performers, Joe Cocker, minus the hair. A lawn party in 1969 would have had plenty of fondue and incense but Ravinia is providing more traditional fare such as hot dogs, cheeseburgers and a “selection of salads” from 5pm-7pm included in the admission price and a cash bar from 4pm-8pm. Of course, back in 1969, there were other things going on out on Ravinia’s lawn, but those involved aren’t talking because they can’t remember. Ironically, several acts that performed at Woodstock appeared at Ravinia in those years—some the very same summer and within days of appearing at Woodstock—but this represents Cocker’s long overdue Ravinia debut. Given the Woodstock theme, Cocker will be emphasizing his many hits that are most associated with that era. For reasons that are unclear, Wisconsin-based 1990s folk singer Willy Porter will open the show; was Joan Baez or Richie Havens not available? (Dennis Polkow)