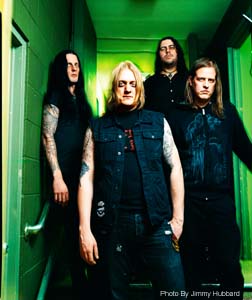 The term “nachtmystium” doesn’t actually mean anything, it was invented, but as a name for a metal band isn’t it totally amazing? The Wheaton, Illinois metal group’s first material lingered in the extreme black-metal realm, raw and muscular, an assault on consciousness. Later the band took to psychedelia and adopted a sound comparable to Black Sabbath on a keg full of coke, and it truly took shape in the dark metal-rock hybrid with last year’s “Assassins: Black Meddle, Part 1,” not only one of the best records of 2008, but absolutely one of the top metal albums of the decade. Founder, singer and guitarist Blake Judd—probably better labeled as a “throatist”—screeches and growls and offers a vision of wreckage and decay. (“Doomsday Derelicts” is the 2009 EP.) The band even secured a hamburger in its name from Kuma’s Corner. There was some nonsense that emerged earlier this year in which the band found itself accused of being a “Nazi” group and had to cancel its appearance at the Scion Rock Fest in Atlanta; Judd and his crew steadfastly deny the allegations, which were drawn from an indirect link between the band and certain labels. Nachtmystium’s live show is treacherous, and on a bill with underground metal legends Pentagram, should be devoured. If you dare, of course. (Tom Lynch)