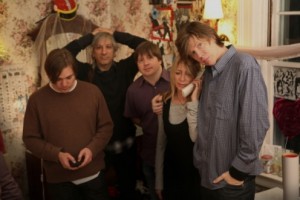 Witness the second career of Sonic Youth. Some could argue that shortly after 1992’s fantastic “Dirty” the band consistently churned out mediocre work, until 2000’s “NYC Ghosts & Flowers,” which was just bad. The following “Murray Street” and “Sonic Nurse” saw the band in mediocre territory again, and then “Rather Ripped” sparked them back into contemporary relevancy. The group’s set at the 2007 Pitchfork Music Festival, in which it played “Daydream Nation” in entirety, reminded us how incredible Sonic Youth can be, and this year’s “The Eternal,” the band’s first on Matador Records, is a glowing return to form. Thurston Moore and Kim Gordon prove that as a songwriting duo, they’re still the same devastating tornado, romping through thunderous two-minute attacks and SY-patented noise fiascoes, sometimes in the same song. Live, well, Sonic Youth has always been difficult to beat, and for a band on its sixteenth record, they sound incredibly, enviably, alive. (Tom Lynch)